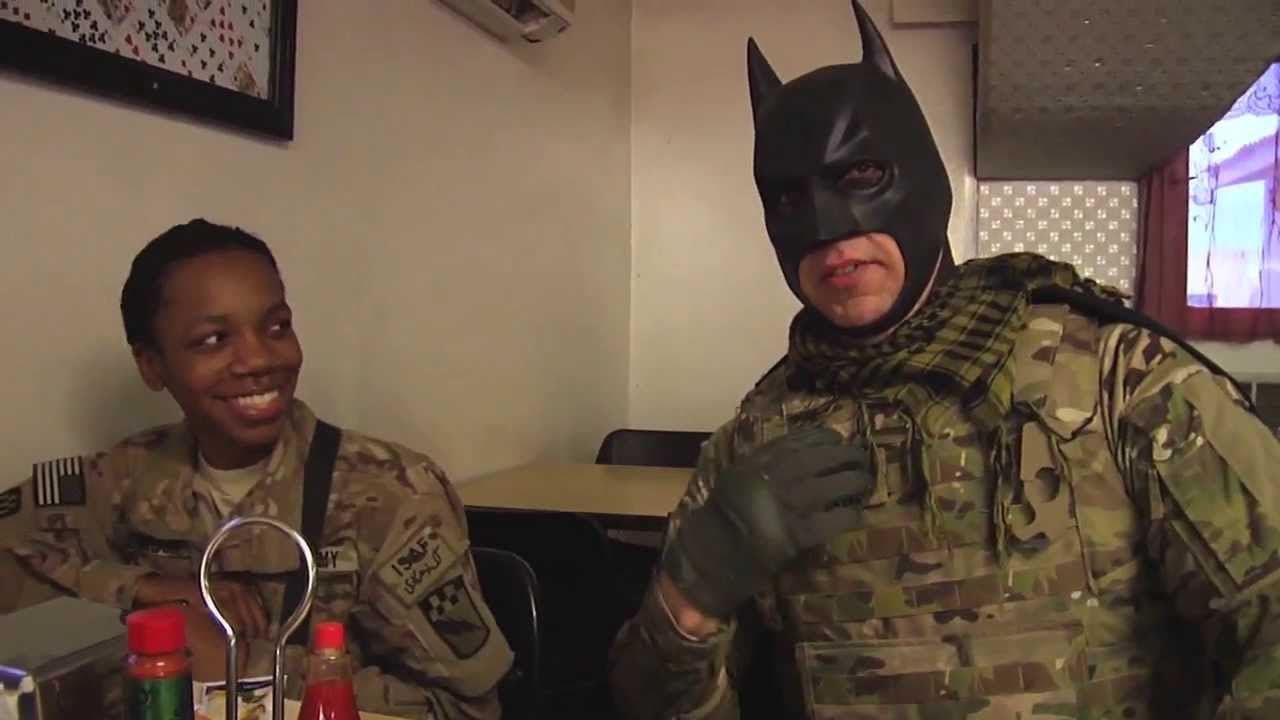 At the largest U.S. base in Afghanistan, a caped crusader known as “The Bagram Batman” is making sure soldiers stay safe in a combat zone. This from the Wall Street Journal:

BAGRAM AIR FIELD, Afghanistan—In fictional Gotham City, Batman protects citizens from crime. Here, at the largest U.S. base in Afghanistan, another Dark Knight is on a different kind of crusade: making sure soldiers carry their rifles and don’t get run over at night.

“Bagram Batman” is the star of a recent series of public-service announcements broadcast to troops deployed in and around Afghanistan. The camouflaged superhero—and his catchphrase, “SWEAR TO ME!”— have become an unlikely hit, winning a cult following among soldiers, and going viral on the Internet.

“He acts just as well as Adam West did,” marvels Maj. Crispin Burke, an Army officer and military blogger, referring to the star of the original Batman movie and TV series in the 1960s.

While his do-it-yourself costume—rubber Batman mask, black cape and reflective belt over combat fatigues—may look like a joke, Bagram Batman has a very real mission: reminding the troops about the do’s and don’ts of life on a forward operating base like Bagram, a small American town planted in the middle of a war zone.

Here’s a video of The Bagram Batman and it’s just ridiculously cool.

Teach at Pirate’s Cove is blogging about “We’re Saved! Super Awesome Breakthrough In Nuclear Power Will Reduce Hotcoldwetdry.” It’s a great post. Go check it out.

Stacy over at The Other McCain has up a bunch of great blog posts including this one: “Still No Confirmation of ‘Sleeper Cell’ Connection in Boston Marathon Bombing.” He’s doing great reporting on this!

Phineas at Sister Toldjah has up a post on “Boston Marathon bombing: third bomber suspected?”

Professor Jacobson at Legal Insurrection has up a terrific post today on “One year ago today: “I am very proud of my Native American heritage, thank you.” Um…we KNOW you KNOW who he’s talking about. 🙂

Have you been to Acting School with Nick Searcy? You need to go now! It’s awesome. 🙂

Over at NakedDC there’s a blog post up on “Seersucker Ban Proposed.” Southerners are not gonna be happy.

Dana at The First Street Journal has up a really good post called “Rule 5 Blogging: Soldiers in Art”. 🙂

Deebow over at Blackfive is blogging about “The Intricate Richard-Dance of The Mentally Insane….” It’s good.

This Ain’t Hell has a bunch of great posts up today but I like this one by Jonn called “Breanna Manning named SanFran’s Pride Princess.”

Instapundit has a lot of good blog reading up at his blog hub including this video on “Michael Barone: Obama and the Democrats Could Not Beat the NRA.”

American Power also has up a great blog post on “Gwyneth Paltrow: ‘I have to work out Monday through Friday for almost two hours, and it’s a nightmare…'”. *insert eyeroll now*

Dan Riehl has a blog post up at Riehl World View on “Russia had 2011 wiretap of Boston Marathon bomber mentioning “jihad.””

Rusty at The Jawa Report has up a great blog post on “American on FBI Most Wanted for Aiding al Shabaab Shot by ….. al Shabaab.” Dead is good.

The Three Sure Things of Life blog has up a terrific post called “The Secret Sits…” Go check them out!

and finally, Ace at AoSHQ has up a blog post “The Media Just Doesn’t Get Science, Part 16,331.” Don’t forget to spend time in the comments. They are always gold. 🙂