There were 20 people killed today in Afghanistan in two suicide bombings coordinated by the Taliban. A spokesman for the terrorists said the attacks were “a message” for the fecklessly confused Secretary of Defense Chuck Hagel, who is in Afghanistan for his first official visit.

Here he is talking to members of the 101st Airborne Division at Jalalabad Airfield in eastern Afghanistan. They, both the troops and Hagel, looked thrilled don’t they? 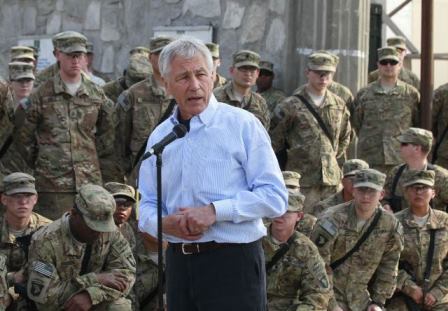 Hagel was nowhere near the blasts, but heard them across the city. He told reporters traveling with him that he wasn’t sure what it was when he heard the explosion.

“We’re in a war zone. I’ve been in war, so shouldn’t be surprised when a bomb goes off or there’s an explosion,” said Hagel, a Vietnam War veteran.

Teach at Pirate’s Cove is blogging about “If You Don’t Believe In Hotcoldwetdry You Must Hate Women’s Equality.” LOL.

Stacy at The Other McCain has up a great blog post on “You Stay Classy, Bill Schmalfeldt!”. Go read it.

Phineas at Sister Toldjah has up a post on “Forget cupcakes. Don’t you even *mention* guns in school, young man!”

Emily at NakedDC has a blog post up on “Morning Report: Put the past away.” 🙂

Laughing Wolf over at Blackfive is blogging about “Flag Carrier Strips Flag Wearer?”

This Ain’t Hell has a bunch of great posts up today but I like this one by Jonn called “CO Senator Mary Hodge pulls a Feinstein.”

Instapundit has a lot of good blog reading up at his hub including THIS one about Harry Reid’s bad week. 🙂

Erika Johnsen has a blog post up at Hot Air on “FL lawmaker: People wanting to purchase ammo should probably take anger management classes first.” The video is epic.

and finally, Ace at AoSHQ has up a blog post “Cool Song” and it’s well, cool. Go check it out.