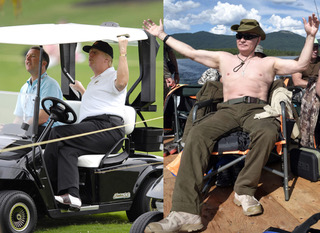 President Trump is heading to his New Jersey golf club for vacation — oops! It’s not a vacation, he says. Over the upcoming 17 days he will be working. Besides, the West Wing will be undergoing some major renovations, and much of the staff has left the White House.

Trump, if you recall, criticized Barack Obama for all his golfing vacays. So he insisted that he would be working:

Working in Bedminster, N.J., as long planned construction is being done at the White House. This is not a vacation – meetings and calls!

Okay, that’s fair. Even Chris Cillizza at CNN urged critics to let the guy have some off time:

Generally speaking, I think “the president is taking a too-long vacation” is a dumb storyline. Presidents — of both parties — deserve some down time. Whether they play golf or clear brush in their free time, it’s fine with me! We all need a little break.

Ah, but someone else is throwing shade at the vacationing Trump, and that’s Vladimir Putin.

Putin himself took a little vacation in the wilds of southern Siberia last week — swimming, hiking in the forests, spearfishing, and riding a quadricycle in the mountains. In other words, Putin did guy things. He also went shirtless much of the time.

Eh, I know, it’s Putin being Putin. So what else is new?