The Daily Wire has posted an article entitled The Death of Masculinity. When one looks around at the cultural landscape or reads some of the current thinking on the internet, it is easy to buy into the death of masculinity.

The Daily Wire article is about Millennial Male (born 1981 to 1996 or as old as 33 and as young as 18) who believes he gets his period every month.

I qualify as an expert to write on this subject because I am a woman who had a monthly period for 38 years, excepting the nine months I was pregnant with my son, and I am the mother of a Millennial Male. My bona fides are thus established.

George Fellowes, according to the article, is a 22 year old of the male gender, who is so attuned to his female roommate that he has a period every month, albeit, without the actual bleeding. From the article:

The student explained his theory about syncing up to his flatmate’s uterus: “I think it’s a psychological thing because we’re so close, we feel the same emotions,” he said. “If you’re hanging out with someone and you’re really close, I think it’s only natural your hormones would sync up.”

Continuing, Fellowes said that the period symptoms set in “like clockwork every month.”

“I get pain in my lower abdomen and in the groin area. I get super moody, really erratic and angry with most of my friends,” he added.

END_OF_DOCUMENT_TOKEN_TO_BE_REPLACED

“Is that an rpg in your pocket, or are you happy to see me?” Sadly, that isn’t a line from a Bill Murray movie, but what this…

END_OF_DOCUMENT_TOKEN_TO_BE_REPLACED 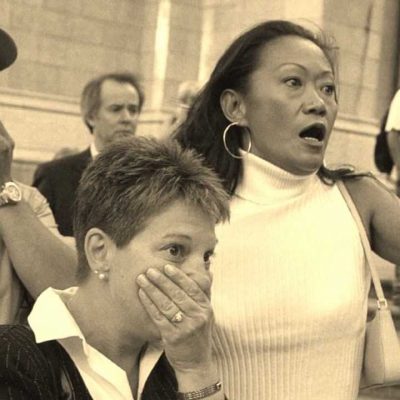 A Victory Girls 9/11 Collective: We Remember, We Are Not Afraid

Maybe some have been able to move away from that day, but I really haven’t. I remember everything. All the details about everything – even after twelve…