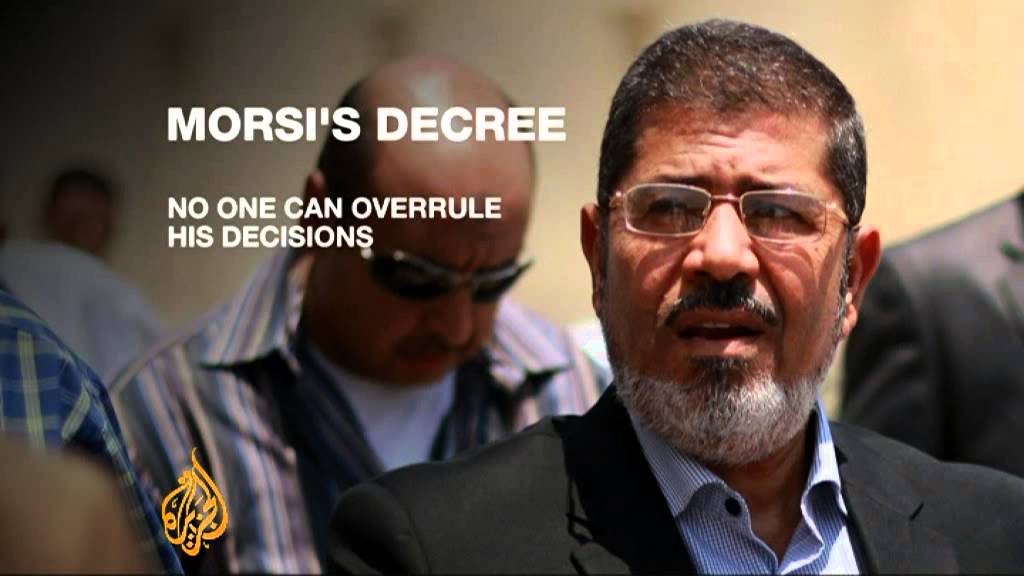 New Pharoah in Egypt? Funny, yet no one is laughing at this latest Middle East power grab. Taking advantage of his so-called “success” in helping to negotiate a “ceasefire” in Gaza, the President of Egypt and Muslim Brotherhood leader Mohammed Morsi, has apparently given himself sweeping new “dictatorial” powers to oversee the country’s political transition. Outraged (when isn’t the Middle East outraged?), Morsi’s opponents called him “Pharoah.” BURN! Here’s part of Morsi’s statement that started the latest round of ME chaos:

“The president can issue any decision or measure to protect the revolution,” said his statement, read out on television by his personal spokesman, Yasser Ali.

“The constitutional declarations, decisions and laws issued by the president are final and not subject to appeal.”

There’s more in this video from American Power:


Morsi’s Decree: No one can Overrule his Decisions

Hm. Dictator language. Of course, the world knows that in Egypt, we simply traded a dictator who was friendly with us (Hosni Mubarek) for one that hates us. But hey, what could go wrong?

This from Fox News:

“Critics of Morsi accused him of seizing dictatorial powers with his decrees a day earlier that make him immune to judicial oversight and give him authority to take any steps against “threats to the revolution”. On Friday, the president spoke before a crowd of his supporters massed in front of his palace and said his edits were necessary to stop a “minority” that was trying to block the goals of the revolution.

“There are weevils eating away at the nation of Egypt,” he said, pointing to old regime loyalists he accused of using money to fuel instability and to members of the judiciary who work under the “umbrella” of the courts to “harm the country.”

Clashes between his opponents and members of Morsi’s Muslim Brotherhood erupted in several cities. In the Mediterranean city of Alexandria, anti-Morsi crowds attacked Brotherhood backers coming out of a mosque, raining stones and firecrackers on them. The Brothers held up prayer rugs to protect themselves and the two sides pelted each other with stones and chunks of marble, leaving at least 15 injured. The protesters then stormed a nearby Brotherhood office.

State TV reported that protesters burned offices of the Brotherhood’s political arm in the Suez Canal cities of Suez, Ismailia and Port Said, east of Cairo.

In the capital Cairo, security forces pumped volleys of tear gas at thousands of pro-democracy protesters clashing with riot police on streets several blocks from Tahrir Square and in front of the nearby parliament building.

Tens of thousands of activists massed in Tahrir itself, denouncing Morsi and chanting “Leave, leave” and “Morsi is Mubarak … Revolution everywhere.” Many of them represented Egypt’s upper-class, liberal elite, which have largely stayed out of protests in past months but were prominent in the streets during the anti-Mubarak uprising that began Jan. 25, 2011.

“We are in a state of revolution. He is crazy of he thinks he can go back to one-man rule,” one protester, Sara Khalili, said of Morsi.

Are you paying attention? Remember the terrorists want to establish a caliphate? Well, this is what a caliphate looks like.

Can Hugo Chavez be voted out?