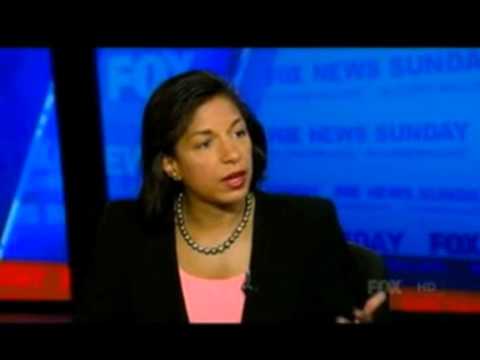 This we know: five days after the terrorist attacks at the American Consulate in Benghazi, which happened on the 11th anniversary of September 11th, Barack Hussein Obama sent out UN Ambassador Susan Rice to mislead the American public about the deadly attack. Susan Rice, on five separate Sunday talk shows, said the attack was a spontaneous protest over an obscure anti-Muslim YouTube video made in the United States by a Coptic Christian. Here’s a reminder of what she said:


From the very beginning, her story didn’t make sense. It was the anniversary of 9/11 and one would think that our embassies abroad and Federal Buildings at home would be on high alert. Plus, as Gateway Pundit points out, since when does the average person carry RPG’s with them to YouTube protests. Hello? And then today – unbelievably – Ambassador Rice repeated lies again. From Yahoo:

U.S. Ambassador to the United Nations, Susan Rice, defended on Wednesday her remarks after a September attack in Benghazi, Libya, that killed four Americans, including the U.S. ambassador to the North African nation.

“When discussing the attacks against our facilities in Benghazi I relied solely and squarely on the information provided to me by the intelligence community,” Rice told reporters at the United Nations.

“I made clear that the information provided to me was preliminary and that our investigations would give us the definitive answers,” said Rice, who is seen as a possible nominee to replace U.S. Secretary of State Hillary Clinton.

“Preliminary intelligence”? Yet in the interview with Chris Wallace above she clearly says “I absolutely believe that because that’s the case.” And the lies about Benghazi continue.