Next post
Another Lockdown And More Mask Theater In Our Future

Remember March 2020? When “two weeks to flatten the curve” was something the vast majority of Americans could get behind? Almost 17 months later and the real panic you see is from our betters scared to death of Americans even trying to live life pre-pandemic.

Boy howdy, did we ever dodge the bullet when Merrick Garland was denied a chance to be on SCOTUS. Unfortunately, Merrick is AG. Not forever, but while he is, he has weaponized the DOJ to work out his personal issues against Enemies of Creepy Joe.

President Biden’s Justice Department warned states on Wednesday that they could face legal action in rolling back COVID-era voting procedures.
“The department’s enforcement policy does not consider a jurisdiction’s re-adoption of prior voting laws or procedures to be presumptively lawful;

How dare states, who are Constitutionally granted the right to set voting parameters, not genuflect before the new normal of Democrat Always Win?

In today’s edition of Pelosi’s abuse of power, Capitol Police have been directed to arrest staff and visitors to comply with her mask mandate for vaccinated individuals.

For Members, they advise not arresting but “reporting Members to SAA for their failure to comply.”

Talk about vaccine passports has been floated before, but now we have a CDC spokeshole being quite enthusiastic about a Red Chinese social credit system to coerce State-approved behavior.

European-style vaccine “passes” may be an option for the U.S. in the future, the Centers for Disease Control and Prevention (CDC) director Dr. Rochelle Walensky said Wednesday. (snip)
“You know, I think some communities are doing that and that may very well be a path forward,” Walensky declared.

We couldn’t help snickering at this …

The Curve the Left Loves

The CDC is no longer dedicated to science – its policy decisions more political than data-driven.

Remember when the CDC said it was safe for fully vaccinated people to go maskless in most indoor settings, including schools? While most people were thrilled, the teachers’ unions, which didn’t even want schools to reopen, were livid and continued to lobby the CDC to bring back the mask mandate in schools until the COVID vaccines are authorized for kids under 12. It looks like they got their wish. 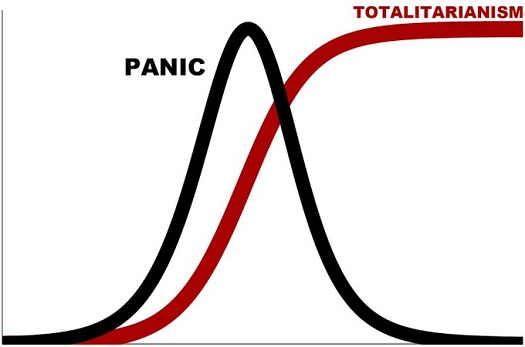