Previous post
Biden To Police: "Shoot 'Em In The Leg!"

Next post
Ben Sasse Dumped On Trump In Phone Call 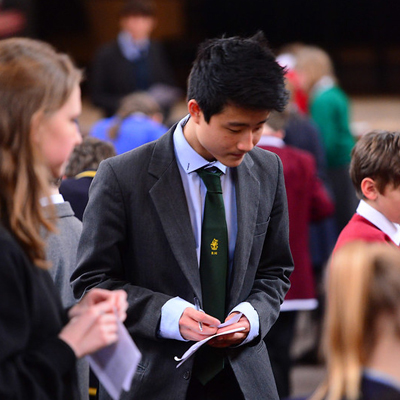 Teen Vogue is at it again. The online zine which regularly fills teenagers’ heads with woke spin now wants private schools abolished. Because white privilege and power or something. Add, too, a dollop of feeeelings.

A college student named Ananya Kumar-Banerjee recently wrote in Teen Vogue that “We Don’t Need Private Schools,” based upon what — facts? data? Nope, just her experience and her emotions, most of them bruised because she was a “brown, queer teenager,” as she calls herself. Supposedly private schools exist to perpetuate the power of White People at the expense of Not White People. This must stop.

“. . .private schools were a place where white people collected their social and economic capital. Private schools ensure that social (and economic) capital in this country remains in the hands of a small elite.”

On top of all that, “you have to look and act a certain way to really fit in.” Really? In high school? Well, there’s a shocker!

Kumar-Banerjee’s problems with private schools began after attending public school in Queens, New York. Her mother had gone to public school there, and wanted her daughter to carry on the tradition. However, Kumar-Banerjee recalls her experience as somewhat less than her mother’s.

“I remember playing with cockroaches in the cafeteria and eating semifrozen peanut butter and jelly Uncrustables for lunch. I remember the smell of rot, the broken toilets, the broken windows.”

After Kumar-Banerjee fell, hit her head, and lost consciousness while playing tag, her parents pulled her from the Queens public school and transferred her to a private school. That’s when she entered years of living hell, to hear her tell it. Because she was a brown Indian girl, after all, and white people there taught her to “prioritize white culture above all else.”

So let’s get this straight.

Ananya Kumar-Banerjee’s parents scraped to send her to private schools; she admits that herself, saying that they “struggled to pay for” her education. But does she appreciate it? Apparently not. Kumar-Banerjee complains that she was miserable as a “brown, queer teenager in an aggressively white, cisheternormative world.” What’s more, she now claims that she was “actually depressed.”

Way to honor your parents’ sacrifice, there, Sparky.

But while Kumar-Banerjee complains about the horrors of private schools, she currently attends. . . wait for it. . . Yale University! Yes, the poor dear brown girl who despised the schools her parents sent her to — out of parental love and concern — chose to attend one of the most elite private universities in the United States. I guess a state college wasn’t good enough for Ananya.

And guess what her major is? Kudos to you if you guessed it: she’s pulling a double major in “Ethnicity, Race & Migration” as well as history. She is also a “Human Right Scholar.” She also has a love for bagels, pizza, and carrot cake — all of which sound pretty white to me. Yet even though she’s queer, she’ll allow you to use the pronouns “she” and “her” around her. Isn’t that nice?

Pardon me if I’m not shedding any tears over Ananya’s distress. First of all, recent data from the Pew Research Center shows that Indian Americans outstrip most Americans in terms of education and income. She doesn’t have much of a victim card, even though she likes to play it. Sorry, but the fact that a childhood friend once said she smelled like curry is not oppression.

Kumar-Banerjee thinks that private schools are places that Biff and Muffy attend in order to learn how to oppress people of color. She’s wrong there, too.

Most private schools are religiously-affiliated: 78%, in fact. Most are Christian, with Catholic schools being the biggest percentage. Christian schools also welcome kids from all nationalities because, well, the faith teaches that Christ loves all children.

While Kumar-Banerjee also wants you to think that it’s the wealthy who send their offspring to private schools, that’s not true. The vast majority of families with incomes over $75K send their kids to public schools — wealthy school districts generally have high-performing public schools.

And yes, overall private schools outperform public schools, according to a government study.

Rather than proving that private schools are repositories for racists and white privilege, Ananya Kumar-Banerjee’s article shows her to be a bitter, wannabe victim who really knows very little about private schools. She’s also a very ungrateful daughter, and a hypocrite.

Both of our children went to private schools — Lutheran grade school and Catholic high school. We scraped and sacrificed our retirement for their education. But the greatest thanks I have received came when our eldest daughter and her husband sent our grandson to a Catholic school, where he’s now in third grade. We indeed made the right decision.