by Donna Miller in Headlines 11 Comments 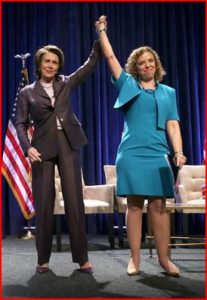 Last week I noted how Democrat Debbie Wasserman-Schultz made a grossly inaccurate analogy about Wisconsin Governor Scott Walker when she said he has backhanded women and dragged them around by the hair. This week, not to be outdone in the theater of exaggeration, the Drama Queen of the feminazi kingdom–in which Wasserman-Schultz is a fawning pawn–stepped up to the plate to rival her minion for “Idiotic Quote of the Week.”

Appearing on Bill Maher’s show Real Time on Friday night, Nancy Pelosi made two statements about the upcoming mid-term elections that are so incoherently incompatible that only a warped, out-of-touch brain like Pelosi’s or Wasserman-Schultz’s would find any sense in it.

Pelosi appeared on HBO’s “Real Time” Friday, when host Bill Maher asked her why he should “care” what happens in the election because of Washington’s perpetual, never-ending gridlock.

” What do I care if [the Democrats] lose the Senate?” Maher said.

“It would be very important for the Democrats to retain control of the Senate. Civilization as we know it today would be in jeopardy if Republicans win the Senate,” Pelosi said, smiling.

Civilization would be in jeopardy? Really, Nancy? At this point in the interview, Maher asked Pelosi about voter turnout, stating that Democrats generally do not come out for the mid-terms. Laughingly, Maher insinuated that voters owe Democrats a vote of thanks. (Video at this link, if you can stand to listen to Pelosi.)

“That’s true,” said Pelosi. “Fear is a motivator, and we are not fear-mongers. The Democrats are messengers of hope, and that’s what we will continue to be.”

Did you catch that? Of course you did. Within seconds of her exaggerated assertion that civilization as we know it will end if Republicans take the Senate in November, Pelosi said that Democrats are not fear-mongers. And the scary thing is, Pelosi will never admit that those statements are contradictory or incompatible. Heaven help us all.

Equally as sad is that Pelosi, Wasserman-Schultz and their Democrat colleagues SHOULD be fear-mongering when it comes to the ruthless actions of ISIS. They should be alerting our nation to the truth of what is happening in the Middle East. Just last night one of the brutal monsters running amok in the Middle East beheaded yet another Westerner. This time it was British citizen David Cawthorne Haines, an aid worker who was in the Middle East to help disabled young people.

Our nation’s leaders should be driving fear into the hearts of all Americans. We need a united front and a united plan for how to tackle the barbaric ISIS animals. Instead, Democrat Wasserman-Schultz callously and unapologetically minimizes the brutal violence perpetrated by men who literally grab their female spouses and girlfriends by the hair and backhand them. (Does that not sound a bit like fear-mongering?) Democrat Nancy Pelosi minimizes the threat of ISIS by laughingly stating that Republicans are fear-mongering when they point out the imminent threat that these radical Muslim savages are for wanting to kill anyone who does not believe as they do.

Wasserman-Schultz and Pelosi should be locked in a room with the families of James Foley, Steven Sotlof, and David Haines. Perhaps if they had to listen to what REAL pain and grief is all about, they would learn would learn what we have to fear in this country. And they might realize that their feigned indignation and nauseating hyperbole are as unattractive and off-putting as their fake campaign smiles.