Next post
Why is Everything About Sex, Amanda Marcotte?

by Catherine Wilkinson in Headlines 10 Comments

Scratch the surface of an ultra-rich liberal elitist and you’ll find the heart of a hypocrite.

If Americans are so racist, how did you, Ms. Winfrey, become so fabulously wealthy?

For someone who is so incredibly wealthy, privileged, influential, and black in America, it is bewildering that you feel that the same Americans that PUT YOU in that position are so racist and intolerant that they hold the President in “contempt” because he is black.  Wait, I forgot something.  Since you are intent on making the color of his skin the reason for American judgement, I want to be accurate about this.  He’s half-white.  What about that white half?  Is that part racist or what?  It’s all so confusing when you assign character traits to the color of skin.

This, from the video here.

“There’s a level of disrespect for the office that occurs. And that occurs in some cases and maybe even many cases because he’s African American. There’s no question about that and it’s the kind of thing nobody ever says but everybody’s thinking it.”

You are continuing to use an old and tired defense of a man whose actions and words have nothing to do with color and everything to do with the “content of his character”.  Are you not paying attention to the news as you travel around the world working to promote your wealth?  Do you not see the debacle of Obamacare?  The foreign policy and diplomacy overseas being decimated by amateurs?  Small business being pushed to the marings because of punishing taxation, rules and regulations?  The illegal spying on citizens?  The Constitution being ignored and violated on a daily basis?

Is all this folly due to good and hard-working Americans (that pay to see your movies) being racist?  Seriously?  Or have you been insulated by your wealth and privilege for so long that you feel safe distilling serious issues down to a cheap and easy claim of racism. 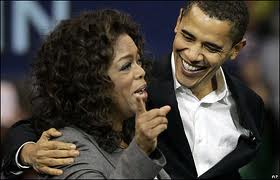 I’m so over you and your notion of racism.

Listen up, Oprah…most Americans want to promote their own “wealth” too.  We, like  you, worked hard to get ahead and want to enjoy American prosperity.  We see those opportunities dwindling daily due to an incompetent, foolish man who ducks responsibility at every turn, supported by the most astonishingly inept cadre of idiots this country has ever seen.  Yes, I’m idiotist, not a racist.

Ms. Winfrey, I know who is acting and talking like a racist.  And it’s not us.