Previous post
Domestic Violence & the NFL "Lets Talk About It"

Obama to Illegal Immigrants: ‘No Force on Earth Can Stop Us’ (Video)

Obama to Illegal Immigrants: ‘No Force on Earth Can Stop Us’ (Video) 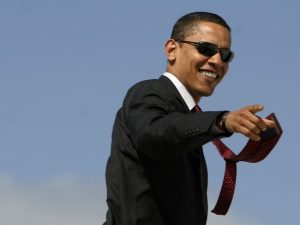 If you had any delusions about where Obama’s loyalties lie, a new video should clear that right up. The border crisis, orchestrated by central American governments and aided by Obama who has been busily looking the other way as illegal immigrants flood our borders, has evidently not been a problem for him — no surprise there, considering that he likes to arm cartels in his spare time.

Obama spoke to immigration activists, and he had some interesting things to say.

Each of us is called on to stand proudly for the values we believe in, and the future we seek. All of us have a chance to reach out and pull this country that we call home a little closer to its founding ideas. That’s the spirit that’s alive in this room. That’s the spirit i saw in Luis and Victor and all the young people here tonight. That spirit is alive in America today, and with that spirit, no force on earth can stop us.

You know what else is a pretty good description of Obama’s newfound “American” buddies who actually aren’t American at all? Criminals. They broke the law coming here, and yet our president wants to roll out the red carpet for them anyway, at the expense of American citizens and immigrants who actually bothered to come to this country through legal channels. And while this might be really great when it comes to garnering votes for Democrats, people who live on the border are increasingly becoming victims of crime and being exposed to disease. But who cares about them? Obama doesn’t. A regular old American who was born and raised here, and flies an American (not Mexican) flag on their porch, isn’t a special interest group, and that won’t just doesn’t capture Obama’s fancy the way a good bit of law-breaking does.

And sure, nothing will stop the criminals from continuing to break our laws if we aren’t enforcing them. In reality, stopping them would be pretty damn easy. All it would take is a brand new fence and an immigration agency that actually does its job and deports illegal immigrants, instead of playing catch-and-release. But as long as Obama is president, that’s not going to happen, of course. He wants people to just stroll across the border, giving a middle finger to our laws, and Obama will be waiting there to give them a high five and some goodies from Uncle Sam.

It may not quite be treason, but it sure is anti-American. But is anyone really surprised anymore?