Previous post
The Beginning of a New Era? Or a Return to the Beginning?

Obama says the US has “Fallen Short of the Ideal’ in Afghanistan and Weekend Links!

Obama says the US has “Fallen Short of the Ideal’ in Afghanistan and Weekend Links! 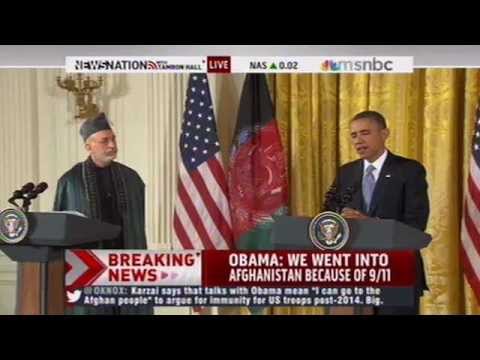 While meeting with the worthless Afghan President, Hamid Karsai, President iWonTwice said the U.S. has fallen “short of the ideal” in Afghanistan. Here’s the video:


Obama went on to say that America has achieved some measure of success in Afghanistan:

“Did we achieve our central goal? And have we been able, I think, to shape a strong relationship with a responsible Afghan government that is willing to cooperate with us to make sure that it is not a launching pad for future attacks against the United States? We have achieved that goal. We are in the process of achieving that goal. And for that, I think we have to thank our extraordinary military, intelligence and diplomatic teams, as well as the cooperation of the Afghan government and the Afghan people.”

Seriously? The troops did not fall short. YOU, President iWonTwice and the greedy, clueless politicians are the ones that tied our troop’s hands and let them down. Troops everywhere say that we won the fights but you made it impossible to﻿ win the war! Your pathetic administration will go down in history as one devoid of cash, morals, truth, ideas, courage, discipline, patriotism, faith, and frankly, anything else that matters to decent Americans.﻿

Stacy at The Other McCain has up a great blog post asking “Nobody Really Likes @LenaDunham, and Deep Down Inside She Knows It, Too>” You have to go read it.

ST at Sister Toldjah has an open thread all weekend about the NFL Playoffs. Fun!

Professor Jacobson at Legal Insurrection has up a terrific post on “I had no idea who Aaron Swartz was, but his death moves me.” Good Stuff!

Emily at NakedDC has a blog post up on “Obama’s nominees are all white, but it’s totally cool because Obama is black.: 🙂

Dana at The First Street Journal has up a really good “Around the Blogroll” post! Thanks for including us! 🙂 Go check out their blog!

Uncle Jimbo over at Blackfive has up a blog post called “Bush’s Gitmo evil, Obama’s Gitmo just peachy.” It’s a must read.

Jammie at Jammie Wearing Fool has up a great blog post “NRA President: “I do not think that there is going to be a ban on so-called assault weapons passed by the Congress.”

Jim Hoft at Gateway Pundit is blogging about “Terrorists Fire On Italian Consul’s Car in Benghazi.” No word yet if they were upset over a YouTube.

This Ain’t Hell has a bunch of great posts up today but I like this one by NSOM, “Target to military widow: Park somewhere else”…seems to me like some re-education of this Target’s employees and management is in order.

Michelle Obama’s Mirror has up a post called “Rats Jump Ship; All that Remains is de Brie” The pictures alone…. 🙂

Ed Morrissey is blogging at Hot Air on the big buzz on Rubio today “WSJ: Rubio “charges up the middle” on immigration”. It’s an important read.

Michelle has up a post at Michelle Malkin on “EBT Abuse: The Cash-for-Drunkards Program.”

Neo-Neocon has up a post today which asks the question “What about banning violent video games?”

and finally, Ace at AoSHQ has up a blog post “Happy Friday! Media Rattled By Coming Layoffs at the NYT.” It’s good.