Obama Grieves Deeply For Charleston While Raising Money and Golfing

Next post
#ConfederateFlag: Should It Be Removed from the South Carolina State House Grounds?

Obama Grieves Deeply For Charleston While Raising Money and Golfing

by Deanna Fisher in People 11 Comments

Nobody knows the pain and heartbreak that the president is suffering right now. And he’s upset about having to make yet another statement after a horrific act of violence – we know this because he told us so, and then promptly called for more gun control.

So, what does Barack Obama do when something horrible and violent happens? He goes and fundraises and plays golf. 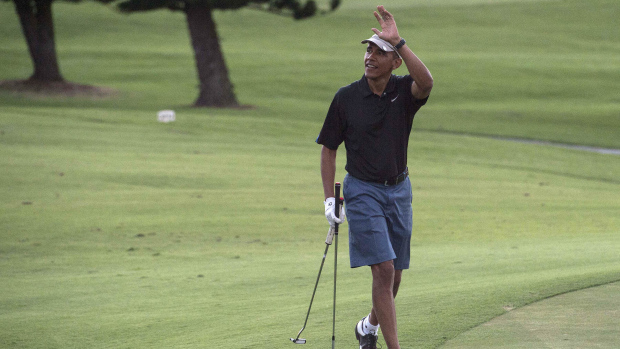 After two days, a speech, an interview (in a garage) and four Dem fundraisers, Pres Obama heads to Palm Springs tomorrow for some golf.

From the Daily Caller:

The fundraisers, one hosted by venture capitalist Shervin Pishevar with 30 people donating $33,400 to the Democratic National Committee (and closed to press), the other hosted by oil billionaire turned “green energy” advocate Tom Steyer, featuring 50 people paying a minimum of $10,000, are the latest example of Barack Obama burying his “heartbreak” in non-work activities.

Everyone still vividly remembers the moment last summer when Obama gave a statement about the brutal beheading of James Foley by ISIS – and then promptly went golfing. Because, vacation.

According to WH travel pool w/POTUS, the president arrived at Vineyard Golf Club at 1:05 p.m., following statement on #JamesFoley and #ISIS

And let’s not forget his fundraising trip to Las Vegas… right after Ambassador Stevens and three other men were murdered in Benghazi.

Obama is still pushing the gun control message. He says it is “urgent.”

Obama said he knew his comments about the lack of hope for gun control in the current Congress when making his initial comments about shooting at the White House on Thursday were interpreted as resignation. They weren’t, he insisted.
“I am not resigned. I have faith we will eventually do the right thing. I was simply making the point that we have to move public opinion. We have to feel a sense of urgency,” he said.

That sense of urgency must belong to someone else, not him, because the only thing he’s urgently after this weekend is money and time on the golf course.

Los Angeles to pick up some checks, then off to Palm Springs for some golf. Whew! So much work. #Obama https://t.co/EPsp0N7prf

He’ll get to fixing gun control later. Just like everything else he promised to fix.