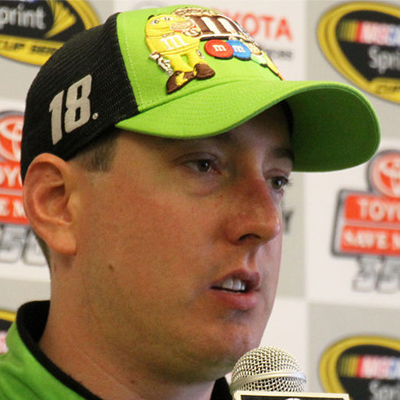 Lemme just start by saying that I know nothing about car racing. All I know is that NASCAR sometimes holds races at the nearby Kansas Speedway in Kansas City, Kansas. I’ve also heard that NASCAR fans tend to like Donald Trump. Plus my kid brother is a big fan of the National Hot Rod Association, and therefore despises NASCAR — for whatever reason. I don’t get it.

But on Sunday, driver Kyle Busch used a bad, bad word in a fit of anger directed at Brad Keselowski after a race in Martinsville, VA. Busch came in second in that race, and Keselowski finished third. Neither driver will advance to the Round 8 Group (pretend I know what I’m talking about here), but Busch got a bit salty towards Keselowski afterwards. He peppered his comments with vulgarities and one big No-No word:

He finished his diatribe with this:

“I should beat the (expletive) out of him right now is what I should do, but that doesn’t do me any good either.”

Keselowski, for his part, was more measured, saying, “I don’t know if he’s mad at himself, mad at me. I don’t sweat that.”

But NASCAR isn’t forgetting what Kyle Busch said. Oh, not the part about beating the shit out of Keselowski, though. Rather, they’re taking him to the woodshed for using the word “retarded,” even though Busch apologized later on Sunday.

In one of my post-race interviews I used a word I should never use and I want to apologize for it.

Now NASCAR is requiring Kyle Busch to take sensitivity training before the start of the 2022 racing season.

Busch isn’t the only NASCAR driver to receive such sanctions. Hailie Deegan also had to go through sensitivity training prior to the start of the 2021 season for using the R-word during. . . get this. . . an online simulation race. She wasn’t even participating in a realtime race or speaking with reporters.

This shouldn’t come as a surprise to racing fans, however. Remember the big kerfuffle in 2020 over the “noose” that black driver Bubba Wallace found in his garage at Talladega? NASCAR president Steve Phelps declared that “the noose was real,” even though the noose later turned out to be a pull-down rope on a garage door and had been there since 2019. What’s more, other garages at Talladega had similar ropes.

But NASCAR has to prove itself to be socially aware, just like Major League Baseball and the National Football League. Especially because of the Southern redneck Trump stereotype that racing has around its neck.

Now as I said above, I don’t know anything about car racing. But I do know a lot about people with cognitive disabilities, coming from a decades-long career as a speech pathologist. And I can also tell you that changes in attitudes towards people with disabilities hasn’t come from re-education camps. Rather, they’ve come over time with education and increased knowledge.

For example, America has come a long way from a time when we regarded such people as “freaks” and sources of amusement.

That’s “Schlitzie the Pinhead” above, although we don’t know what his real name was. He was born in the Bronx sometime in 1901, and was afflicted with microcephaly, a disorder which results in a small brain, skull, and even body. He also had severe mental disabilities, and became a sideshow performer in several circuses. Schlitzie most famously appeared in the 1932 film Freaks, and performed in a dress because he was incontinent. The dress made it easier for his handlers to change his diaper.

Move ahead several decades to the time when I was an undergraduate studying speech pathology. Words like “pinhead” or “moron” had long been abandoned as words used to describe people with cognitive disabilities. However, we still used classifications like “educable” or “trainable” mental retardation. By the time I was out of graduate school and working at my first job, the terms had become “educable mental handicap” or “trainable mental handicap.” Now those classifications are also long gone, and since I left public schools many years ago, I don’t know what the current phrases are.

But the changes didn’t come because of threats of “sensitivity training.” None of us ever went to re-education seminars to learn Right Speak. As information about people with autism, or cognitive disabilities, or speech disorders grew, professionals adapted the use of more respectful language. So has much of America.

I don’t know anything about Kyle Busch, except that he appears to have a very short fuse. He also lacks a verbal filter. But NASCAR — and other sports leagues — should stop with the sensitivity training. Knowledge and education lead to change, not Orwellian re-education camps.