Mitt Romney lunches with Obama at the White House

Next post
California Named Worst-Run State in the Country

Mitt Romney lunches with Obama at the White House

The lunch between Romney and Barack Hussein Obama began at 12:30 pm when Mitt arrived. He left at 1:41 pm. The 1 hour, 11 minute “lunch” was closed to reporters and camera crews and the two men were not expected to make any public statements. It was apparently a private conversation. Darn it.

Buzzfeed has great photos of Mitt Romney arriving at the White House. We’ve posted one below. 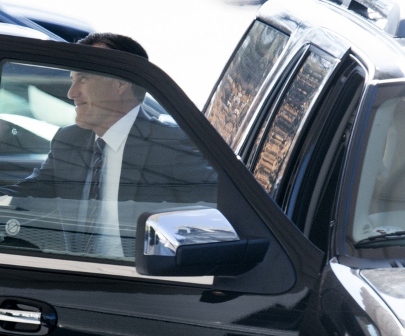 By the way, before arriving at the White House, Mitt Romney met with his running mate Rep. Paul Ryan (R-Wis.) up on Capitol Hill. Their meeting was described as “a constructive and positive conversation, sharing updates from their families and reflections from the campaign”. They also discussed ways to resolve the nation’s fiscal and economic challenges.

“I remain grateful to Governor Romney for the honor of joining his ticket this fall,” Ryan said in a statement, “and I cherish our friendship. I’m proud of the principles and ideas we advanced during the campaign and the commitment we share to expanding opportunity and promoting economic security for American families.”