Previous post
No Excuse For Milley No Matter Who Was President 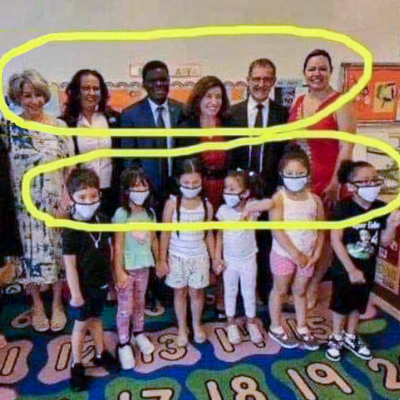 It’s come to this: New York Gov. Kathy Hochul has announced that masking for children in day care facilities would begin. She said it’s because of the “scariest stories” from the “national news” about kids contracting Covid.

So even though her predecessor, Andrew Cuomo, tried this in May and failed after public outrage ensued, Hochul is giving it another go.

But there are ways of dealing with this, assures Kalie Donaldson of the Erie County Child Care Resource Center. Parents can “have conversations” with their children.

“But parents can help at home by having conversations with their children, practicing their mask-wearing, and making sure they are as prepared for this as possible.”

You mean like with this little guy? Maybe his parents didn’t have an adequate “conversation” with him. Or he just didn’t get the governor’s memo.

THIS IS CHILD ABUSE.@GovKathyHochul YOU ARE A CHILD ABUSER pic.twitter.com/a2a9jKNyTx

“Do you say this to all the parents trying to stop their toddler from trying to take off their diaper in public? They don’t understand rules yet. They don’t know why we make them wear clothes. They’re uncomfortable so they try to take them off. Sometimes in bad places.”

Or this guy comparing masks to shoes:

“Yeah i called the cops on my cousin because she kept making her kids wear shoes in public too. They hate it!”

Leave it to Twitter to bring out the Stupid in people.

Let’s unpack this nonsense, shall we?

Shoes, diapers, and clothing do not impede breathing. Masks, however, can — especially for a young toddler. And when breathing is impaired, panic sets in. It doesn’t matter if it’s an adult, child, baby, cat, or puppy — any sentient mammal knows it must breathe to survive. Forcing a mask over the mouth of a frantic toddler is abuse.

This cruelty also happened last week on an American Airlines flight. The airline booted a woman and her two-year-old from a flight because the little guy wouldn’t wear a mask. The mom claimed he has asthma and the mask made him hyperventilate — but that’s not the most important thing here. Masking a terrified two-year-old is heartless. The flight attendant who insisted on the mask is a power-tripping tyrant.

A mom whose two year old wasn’t wearing his mask properly was kicked off an American Airlines flight. This is where we are, we have emboldened the biggest losers in our society to believe they are morally virtuous because they wear masks: pic.twitter.com/rwHMCmjwaW

Besides that, masking of children this young may not even be effective. As Dr. Marty Makary of Johns Hopkins wrote in the Wall Street Journal last month:

“Believe it or not, we could find only a single retrospective study on the question, and its results were inconclusive.”

“We lack credible evidence for benefits of masking kids aged 2 to 5, despite what the American Academy of Pediatrics says.”

Not only that, but all Gov. Hochul needed to do before she considered masking tiny children is to look across the Pond to Europe. Most of Europe, in fact, doesn’t require their children to wear a mask, and that’s children of any age. Spain, Italy, and France in particular don’t require children under five to wear them, and Great Britain doesn’t require masks in schools at all.

But the United States seems to have a bumper crop of autocratic governors and bureaucrats who relish their power trips. Meantime, tiny children will suffer through mask diktats because grownups have to feel better. As City Journal writer John Tierney put it, these practices serve “no more rational purpose than our ancestors’ child sacrifices to the gods.”