Next post
Remembering Those Who Pledged Lives, Fortunes, and Sacred Honor on this Independence Day

In 1941, a young Louis Zamperini enlisted in the Army to help the United States in its fight against the Axis.  As a B-24 bombardier, he was on a rescue mission when his plane “malfunctioned and fell into the sea.”

Lieutenant Zamperini, the co-pilot, Second Lt. Russell Phillips, and the tail gunner, Sgt. Francis McNamara, shared a raft, and fought off hunger, thirst, heat and storms while trying to avoid being shot by Japanese planes or eaten by sharks. They subsisted on rainwater and the few fish they could catch. Lieutenant Zamperini, who was 5-foot-9, went from 125 pound to 75 pounds. After 33 days, Sergeant McNamara died.

Louis Zamperini spent over a month on that raft, only to be captured by the Japanese.  His hell had just begun.

“I could take the beatings and the physical punishment,” Mr. Zamperini said, “but it was the attempt to destroy your dignity, to make you a nonentity that was the hardest thing to bear.”

But he did bear it.  He spent the rest of the war in a Japanese prison camp, and was liberated in 1945.  Before he even enlisted, however, he was famous.  As a teenager, he held the world record for the fastest mile: 4 minutes, 21 seconds.  His record stood for 20 years.

Zamperini said later that his athletic training helped him immensely during those dark times in the prison camps.  Self-discipline, fortitude, belief in himself…all of these things helped him survive.  After the war he battled alcohol, and almost lost his wife.  He cleaned up his life, however, and stayed married to his bride for 54 years until her death.

Louis Zamperini died yesterday of pneumonia.  He was 97.

He was the quintessential American: strong, intelligent, true to himself and his country.  He was not without fault but he was still an example of how to deal with those faults and be the person that our nation and our God expects us to be.  It would be trite and cliched to say that the world is a lesser place because of his passing, but it would be true.  He is part of the best our nation has to offer, and I am sad to know that he is gone. 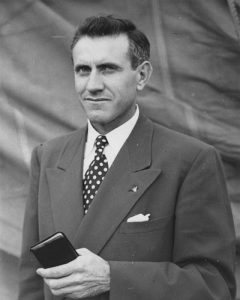