Levine Gets Four Stars For Being Transgender

Next post
Biden Administration Plans For The Forever Pandemic

Levine Gets Four Stars For Being Transgender 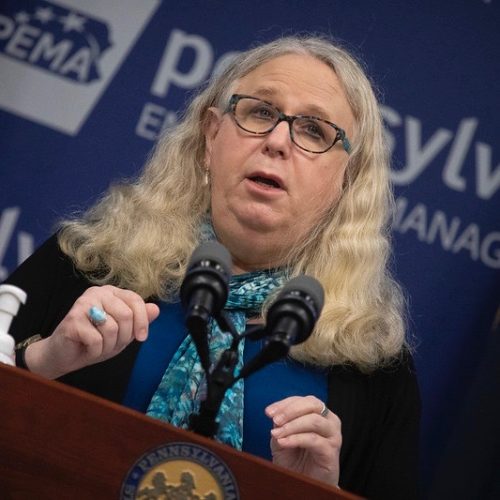 We begin our Wednesday morning with more tales from dystopia. No. You were not having a nightmare yesterday. Yes. Rachel Levine was sworn in as a four-star admiral.

I know you’re probably hoping I would snap you out of the warped reality that makes up our leadership and decisions they make on the daily. Just when you think things couldn’t get more farcical, here it is. Richard-err-uhh-Rachel Levine is now a four-star admiral, the highest-ranking openly transgender official in the US. Rachel, whom, once upon a time was Richard, who played high school football with General Mark Milley. Boy, that locker room must have been a hoot-miller ranting about white rage and Levine longing for the days he would not have to wear a jock strap. What a pair! I digress.

May this appointment today be the first of many more to come as we create a more diverse and inclusive future. Diversity makes us stronger. Each person has a different perspective and different strengths that they bring to make the whole community stronger. The time is now for our country to continue to move the bar forward for diversity and I am proud to wear this uniform and answer the call.”-Rachel Levine

Oh, the diversity and the inclusion and the intersectionality. This is a moment in history, folks. The first transgender four-star admiral! How diverse are we? Look at us! So much diversity, equity and inclusion! I suppose we can look on the bright side. The uniform is not a bikini. Thank you, Jesus.

I assume a rear admiral

The US Public Health Service Commissioned Corps has about 6,000 uniformed officers and is tasked with responding to health crises like the coronavirus pandemic and natural disasters.”-BBC.com

So glad you mentioned health crises like the coronavirus, BBC. Shall we harken back to the early days of the pandemic in 2020 when Richard/Rachel was Secretary of Health in Pennsylvania-a state where about 65% of coronavirus deaths were nursing-home residents? Where in counties in the hardest hit southeastern part of the state, long-term care residents accounted for as much as 80% of county deaths, per this? What did Rich/Rach do with his/her 95 year-old mother? Oh, I know! Mr./Ms. Levine took her out of the care facility she was in while other elderly people were left to perish in these same care facilities. Such a voice for equality and the marginalized, wouldn’t you say? Of course, this performance earns Dr. Rachel Levine a four-star admiral’s title. Keep pushing that bar forward in the name of diversity!

In comes 2021…and Build Back Botched Brandon says, “hold my ice cream cone”. He dubs Rachel Levine, Assistant Secretary of Health. Remember when the liberals were going nuts about Trump’s mental acumen? About Trump’s McDonald’s runs? So unhealthy! But a man who is now a “woman” advocating for the health of Americans? A man, who is now a “woman” is advocating to push the progressive agenda on teenagers who may feel the pressure of the current times and having thoughts on puberty blockers and damaging sex-change surgeries? Rand Paul asked this question of the four-star admiral and this is what he got:

Levine could not even answer this question. Diversity and politics and posturing all take priority over medical expertise. This is what gets an Assistant Secretary of Health title. And now, this is what gets a four-star admiral title as well.

Admiral of what? We don’t know. And Levine says (s)he’s not worried about the criticism. Why should (s)he be worried?

Says the individual who grew up in an affluent community in white-bread New England, who went to Harvard and Tulane to study medicine. Now, this former man, is “the first female four-star admiral” in the public health corps? Oh, right. It’s LGBTQ+ History month now and because of this, it is the perfect time to bestow Levine with this honor. Didn’t they have another month a few months back?

Why does the idea that sex and gender are two different things upset people so much?

To the contrary, the difference between “sex” and “gender” does not upset most people. The denial of reality of some is what is upsetting. This person, Rachel Levine, has a medical degree. This person, Rachel Levine, has had the privilege of being a “white man in America”, something most liberals frown upon. This man, named Rachel Levine, attended an Ivy League university. Yet when this MAN in a dress seemingly earns a prestigious title and honor, the left calls him a woman and applauds her accomplishments and does not bat an eye. A senile old fool for a president and his administration of wack just named a MAN who calls himself Rachel Levine a four-star admiral and celebrated diversity and inclusion and her as a woman. And the feminist, rainbow-haired mafia cheers. Yassssssss, Queen Levine. Keep fighting the good fight of warding off the patriarchy and shatter those glass ceilings!