Next post
SCOTUS Dobbs Leak Investigation Is A Failure 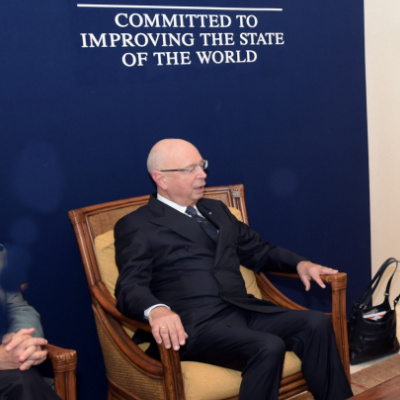 Hubris. Hypocrisy. Megalomania. Expensive Hookers. Come one, come all to the World Economic Forum at Davos, Switzerland and see a display of the dangers of the combination of great wealth and towering arrogance that is like anything seen anywhere else in the world. Klaus Schwab convened the 53rd annual gathering of the elites in the Alps with this year’s theme of “Cooperation in a Fragmented World”.

I don’t know whether to laugh at these fools or buy a parcel of land in the Smoky Mountains and build a fallout shelter. Even the description of how Klaus Schwab invented this mutual admiration society is scary. From the WEF website:

In the early 1970s, the Cold War split the world while the Vietnam war split America, an oil crisis was looming, and a German economics professor had a bright idea.

The idea was unconventional at the time, but it has since taken hold. It was Professor Klaus Schwab’s “stakeholder theory”, meaning a company should serve all its stakeholders, not just its shareholders: employees, suppliers, and the community it is part of. The vision for this socially responsible “stakeholder capitalism” became the guiding principle of the World Economic Forum.

Prof. Schwab, an engineer and economist, founded the Forum in 1971. He chose Davos as the home for the annual meeting for the escape from the everyday that the mountains represent in Swiss and German culture, most famously captured in the novel The Magic Mountain. ‘The spirit of Davos’ is an attitude of openness and cooperation that sets the tone for the annual meeting to this day.

Aha! Now, I know who came up with the “stakeholder theory”. Bast*ard. All companies should be good corporate citizens, but all the “stakeholders” don’t have the company’s best interests at heart. Totally different concepts. It’s super cool that Klaus and his fellow narcissists can “escape from the everyday” to plot the future of us serfs. Bast*ards. Everything about the World Economic Forum screams arrogance and bubble.

Yesterday, Nina told you how the Secretary General of U.N. Antonio Guterres dinged the elites of Davos for not doing enough and John Kerry said he needs more “Money, money, money….” Today, we are going to show you Herr Professor Schwab ran from a Japanese lady journalist and John Kerry congratulated himself for being with such brainy, rich folk.

In his opening remarks on the “fragmented world”, Klaus Schwab said:

“Our generation has reached a turning point confronted by existential problems, climate change, wars, and viruses and they can all lead to an 'extinction' to large parts of the global population.” – Welcoming Remarks & Special Address by Klaus Schwab – #WEF23 pic.twitter.com/35vvwlg5TC

What about Pinky and the Brain.
"What are we going to do tonight brain ? "
"Try to take over the World ! " pic.twitter.com/CaPnf3LJ1D

The elites of the world and their, pardon my French, circle jerk friends may have Klaus Schwab and John Kerry, but we have Tucker Carlson and Elon Musk. From Red State:

Elon Musk has shown he’s a guy who isn’t afraid to speak his mind, whatever toes in the power structure he might be stepping on.

This week, he’s been turning his eye to the World Economic Forum. As we noted before, he said that some of their actions “gave him the willies.”

But now he’s been blunter in his criticism, “WEF is increasingly becoming an unelected world government that the people never asked for and don’t want.”

And this is our new favorite. The so-called World Economic Forum seems to exist to destroy national economies. Not an overstatement. It was the WEF, keep in mind, that told the government of Sri Lanka to give up modern fertilizer. Oh, good plan, guys. Go ahead and try it. Result? The country collapsed and people starved.

Then it was the WEF that promoted Sam Bankman-Fried’s historic Ponzi, the biggest financial fraud in history. Apparently the savants at the World Economic Forum just couldn’t tell that this twitchy, pill-popping kid in cargo shorts, who literally played video games during interviews, was an utterly transparent scammer. They had no idea. They thought he was a genius, just like them.

And of course it was the WEF that predicted the COVID lockdowns would “quietly improve cities,” not turn them into ominous hellscape of unemployment, drug addiction and crime. It seemed like a good plan at the time. “Hey, I’ve got an idea. Let’s prevent people from working. That’ll make them rich. It’ll quietly improve life for everyone.” That’s the World Economic Forum for you.

The WEF is often described as a group of supervillains, but they’re also hilariously idiotic – not just evil, buffoonish. And by the way, they know it. They’re smart enough to be embarrassed anyway. The WEF has since deleted its tweet about COVID lockdowns. It has memory hold. Its promotion of scammer Sam Bankman-Fried. It has conveniently forgotten all about its guidance on Sri Lankan fertilizer, on which it turns out the WEF is not an expert. None of that ever happened. The slate is clean.

So we’re ready for yet another World Economic Forum annual meeting in Davos, Switzerland, which is under way right now. The event kicked off this week with 84-year-old Klaus Schwab. He’s the founder of the WEF, promising to “master the future.”

They are scary because they never face consequences for their actions. On the other hands, they are rich fools and “hilariously idiotic”. The 411 is that hookers are getting $2500.00 per {{activity}}?

The world has had worse existential problems than these twats. Take comfort in that and have a laugh.