by Jodi Giddings in Headlines 15 Comments

Looks like Moms Demand Action—that “grass roots” anti-gun group funded by billionaire do-gooder Michael Bloomberg—has managed to bully yet another American restaurant chain into kowtowing to their totalitarian demands. This time it’s Chipotle, maker of everything burrito. And what have they demanded, you ask? What else. Bloomberg’s life’s mission: To disarm the American public.

You may recall the recent headline about a group of young men open-carrying in a Jack in the Box in Texas. The story—at least as related by Shannon Watts of Moms Demand Action, a woman not exactly known for her honesty—was that the workers inside the restaurant were terrified by the sight of men with Scary Black Guns and locked themselves in the freezer. That claim has since been debunked by Open Carry Texas, but that hasn’t stopped Ms. Watts from continuing to spread that Whopper of a myth. This time, a couple of Chipotle customers open-carried their SKS rifles, not as a protest, but simply, they say, as an accompaniment to their meal.

Naturally, Ms. Watts felt compelled to stick her dictatorial, gun-banning nose into the non-event, demanding that Chipotle—who reports it’s never taken a position either way on carrying guns, but rather, is focused on selling burritos, go figure—ask its customers to cease carrying in its chains, you know, for their own safety. From Twitter:

“We support the Second Amendment but we also need to feel safe and secure in the places we take our children. In states where no background checks or training are required to buy semi-automatic rifles and carry them openly in public, businesses have a duty to protect their employees and patrons. That’s why we are calling on Chipotle and other businesses to follow Starbucks lead and make a clear statement that firearms are not welcome in their restaurants.”

Seems “shall not be infringed” is somehow confusing to Ms. Watts. While Chipotle is, of course, free to make its own policy, unfortunately, following in the footsteps of Starbucks and Jack in the Box, it caved to Moms’ pressure, resulting in mass celebration from Ms. Watts and her less-than-informed supporters. (You can read Chipotle’s full response here.) 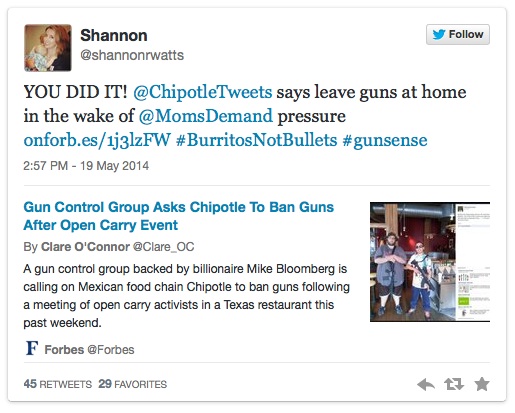 Now all they need are conspicuously-placed signs that read “Gun Free Zone” to complete their customer-safety policies. Shh…don’t tell the criminals.

Now I don’t know about you, but the scene of two men carrying semi-automatics while awaiting their Jumbo Jacks is just another Tuesday afternoon around my home, and I suspect, in much of Texas, too. While I won’t advise open carrying an AR inside your local food joint, simply because it’s common sense, I also won’t be running for the hills or “sheltering in place” at the sight of someone who chooses to open carry because Ms. Watts tweets out a deceptive message telling me I should. Ms. Watts, you don’t speak for me. I feel safer where there are guns. I’m armed, and this mom won’t be disarmed by the likes of some truth-twisting interloper who prefers women cower in corners like victims. Responsible gun-carrying moms like myself are not out for shock value; we carry for self defense. I will wager that most anyone who sees me would never know I’m carrying, including the folks at Chipotle serving me a Burrito Bowl. And that’s just fine with me. Because if the time comes, God forbid, that I need my weapon for self defense, and even for the defense of those who will never stop trying to take that right from me—I’m looking at you, Gun Grabbing Shannon—you can bet I won’t be sheltering in place, waiting to become the next victim. Ms. Watts can keep trying to disarm her fellow women. She can keep trying to instill fear of guns into Americans. And she and Bloomie can keep on wasting his tens of millions of dollars that could be going to help the needy that Nanny B. professes to care so much for. But I predict the only thing they’ll succeed in doing is creating more gun owners. By the way, Shannon, guns go great with salsa.