Previous post
Air Marshals To Babysit At The Border

Next post
FTX Crypto Founder Claims He Only Sort Of Lied 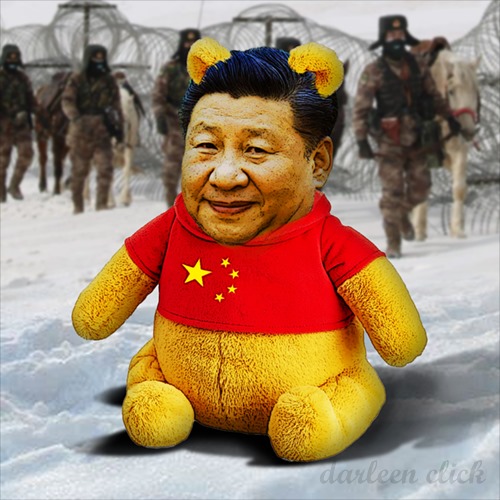 The repression of the lockdown protests in China is fully underway. It remains to be seen if the Chinese people are truly so fed up that they will keep protesting, or if the authoritarian boot heel of Xi Jinping and the Chinese Communist Party will continue to use technology and social media (with Apple’s help) to crack down. Stalin could only dream of using the technology that Xi has at his disposal.

And as we all know, Disney as a corporation has never said boo (or Pooh) to China’s brutal human rights abuses – so long as they could keep making money in China. Ironically, their insistence on “going woke” has kept their most recent movies from being released in China and several other countries – which tells you what their priorities are as a company, right?

Enter the Shop Disney Japan website. Now, most of the official Disney Stores, which used to be in malls across the country, have been closed in favor of their website, ShopDisney.com. And naturally, other countries have their version of the same online store, with the country’s designated domain name. In Japan, all their website URLs end with “co.jp”. And the Japanese website offers different items than the American website. Let’s take for example, the character of Winnie the Pooh, which Xi Jinping has banned from China because he was once compared to the silly old bear… and his ego is paper thin.

On the American website, there are plenty of Winnie the Pooh items. There are just… more… on the Japanese website. And one of those designs is definitely taking a solid shot at Xi Jinping and the current moment in China. (And many thanks to my friend Ben for passing this tweet along.)

This is 100% real, and really available on the Shop Disney Japan website. And not only can you get it on a t-shirt, but because it is part of this “D-Made” line, it means that the image can be printed on SO MANY THINGS. It’s a mug! It’s a cushion! It’s a tote bag! It’s a “eco” shopping bag! It’s wall art! And if you’re not laughing hysterically at JUST HOW PISSED Xi Jinping would be about this image, then I don’t know what to tell you.

But you say, Xi hates all images of Winnie the Pooh. Why is this one different?

Well, let me tell you.

It’s not the image of Pooh itself – it’s the paper in his hands.

As mass demonstrations first erupted in major cities across China last weekend, protesters could be seen holding up the blank sheets of white paper, leading some to dub the protests the “white paper revolution” or the “A4 revolution” for the size of the standard sheet.”

The so-called “white paper revolution” was sparked by a deadly apartment fire in the northwestern city of Urumqi that killed 10 people and injured nine others. Many blamed the strict COVID-19 policies for slowing down rescue efforts at the apartment building, which had been in a state of lockdown for several months.”

Some protesters initially held up the white sheets of paper as a symbol of mourning, as white is the color of death and mourning in Chinese culture, according to The New York Times.”

However, the sheets of papers have largely come to be used as a symbol of defiance against the Chinese state’s strict censorship, while also serving as a practical method for evading censorship itself.”

“The white paper represent everything we want to say but cannot say,” one young protester told Reuters.”

“[It] means ‘we are the voiceless, but we are also powerful,’” another protester told the Times.”

Winnie the Pooh holding a piece of white paper is, quite honestly, a HUGE political statement. Does Shop Disney Japan know that they are selling this image? The “D-Made” line is similar to the concept of Amazon’s “Merch on Demand,” which allows people to have images printed on a large selection of items as they are ordered. According to the English translation at the t-shirt link:

D-Made is a made-to-order series that allows you to design the goods you want. Get your hands on items that express your unique lifestyle from a wide variety of characters, art styles, and product combinations.”

The artist is Kanahei, a digital sticker creator from Japan, whose designs can be seen quite a bit in the “D-Made” store on Shop Disney Japan. I doubt that this particular Winnie the Pooh design was done specifically for this Chinese protest because of the timing involved, but hot damn, is it not just the most apropos image ever??

Diplomatic relations between China and Japan have never been particularly warm, but right now they are downright frosty for a variety of reasons, but I’m betting a lot of Japanese people would be approving of this image if they knew about it. (And probably a whole lot of Chinese people, too.) Since the image existed before the beginning of these protests, this seems to be more of an amazing coincidence of monumental political implications rather than a deliberate poke in the eye from Disney Japan to Xi Jinping.

The question now becomes, will Disney the parent company make Shop Disney Japan remove this particular Pooh image from the “D-Made” line if they find out about it? And how much is shipping from the Shop Disney Japan website, and what is the current dollar to yen conversion rate? There’s a lot of people in the United States that would buy some of this merch, if for no other reason that it would drive Xi Jinping absolutely crazy.