In Defense of Looting: Exercise in Leftwing Sociopathy

In Defense of Looting: Exercise in Leftwing Sociopathy 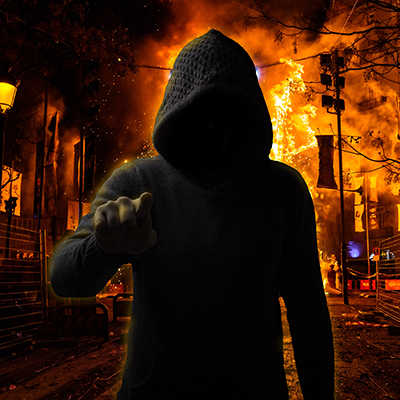 The latest assault to the rational adult’s intelligence is this NPR tongue-bathing interview with Vicky Osterweil, author of a Newspeak book entitled In Defense of Looting. It might as well be entitled “In Defense of Rape.”

It’s difficult to find a lot about the author’s background. This is the criminal enabler’s only published book on Amazon, but it seems she’s been around the Woke Scribbler circuit for a bit.

Oh my goodness! She’s an agitator. Well shut my mouth and look at my surprised face. Who would have guessed someone so self-described and who has written for Al Jazeera doesn’t have a solid grip on morality? She maintains a [now protected] Twitter account “insurrection summer” @Vicky_ACAB. Though, we can get a taste of her criminal mindset and her joy at inspiring others to loot and hurt WrongPeople™ here and here.

Meanwhile, taxpayer-support NPR never challenges any of her fallacies, question-begging or outright gaslighting. Osterweil is from the Ministry of Truth and she really yearns to make you see five fingers.

Q: For people who haven’t read your book, how do you define looting?

VO: When I use the word looting, I mean the mass expropriation of property, mass shoplifting during a moment of upheaval or riot. That’s the thing I’m defending. I’m not defending any situation in which property is stolen by force.

The most basic American principle that recognizes individual sovereignty, agency and inherent rights, is that all interactions between people shall be as voluntary as possible. Mutual consent is the floor of western-liberal morality. Osterweil obliterates that completely and with great malice.

… [Looting] gets people what they need for free immediately, which means that they are capable of living and reproducing their lives without having to rely on jobs or a wage.

It also attacks the very way in which food and things are distributed. It attacks the idea of property, and it attacks the idea that in order for someone to have a roof over their head or have a meal ticket, they have to work for a boss, in order to buy things that people just like them somewhere else in the world had to make under the same conditions. It points to the way in which that’s unjust. And the reason that the world is organized that way, obviously, is for the profit of the people who own the stores and the factories. So you get to the heart of that property relation, and demonstrate that without police and without state oppression, we can have things for free.

Come on, bitch. You can’t possibly believe that! Per Silent Cal’s quote above, you cannot have individual rights without secure property rights. You know what you call someone who gets free food, housing and clothing but never actually owns any of it and their rights to their own labor is forfeit?

NPR interviewer Natalie Escobar can’t stop tongue-bathing Osterweil here long enough to even remotely address the elephant in the room. Hey, Vicky, what magic fairy godmother is going to conjure up your free filet mignon, stored in your free Sub-Zero refrigerator in your free beach house? How many WrongPeople™ are you going to have to kill or force into slavery to provide for this free stuff utopia you’re trying to sell?

See, Vicky, you damaged, Marxist malcontent, you are not going to get people to voluntarily work their asses off for you when you’ve already told them they have no right to their own efforts. You’ll have to use force, even if you have to Newspeak it to “GoodForce”.

Vicky doesn’t admit it but in addition to that lie, she knows what her sick Marxist ideology inevitably leads to.

Looting is a crime against human beings. Each piece of property stolen represents a chunk of time stolen from each person’s life involved in the supply chain.

… [Looting] provides people with an imaginative sense of freedom and pleasure and helps them imagine a world that could be. And I think that’s a part of it that doesn’t really get talked about—that riots and looting are experienced as sort of joyous and liberatory.

Looting is a physical violation of mutual consent. There’s a reason why people who have their stores looted or their homes burgled talk in terms of it being a physical violation. The joyous and liberatory experience Osterweil promotes is the same thrill that a rapist feels who has slipped a drug into the drink of the victim — the adrenaline rush of stealing something free of any resistance on the part of their victim.

Since Osterweil quite clearly dismisses consent, she could easily write in defense of rape … as long as it was “non-violent” rape, of course. It’s not like Osterweil is alone. I was made aware of this emo-driven Marxist polemic by cowardly Marxist who told me I had to really listen to understand (and before she’d discuss anything with me) …

Oh, honey, I do understand. Marxists don’t give a flying fig about people. The ideology is as primitive as pre-Columbian cannibalism and as Othering as its cousin, Nazism. People like Osterweil provide the fuel and fodder like Kim Jones are there to set torch to it. Whether the conflagration consumes the rich or poor, black or white is of little concern to these fine examples of cluster B personality disorder. They want power or they want to see it burn.