Another year. Another April 15th, the day most of us who actually pay taxes dread with every ounce of our being. For the record, I hate taxes.

So to “honor” the yearly tradition of paying months of our hard-earned dollars to an agency that targets specific groups of its fellow Americans for political speech suppression, Americans for Tax Reform has compiled a whopping list of new taxes Mr. Obama has proposed since the inception of his imperial reign. (Because we all know that a government that does everything except what it’s tasked with is incredibly expensive!) In case the current tax code isn’t convoluted enough, since taking office Mr. Obama has proposed lots of new taxes. How many? Well, 442 to be exact. Ninety-three of which are for fiscal year 2015 alone. And these new sources of revenue would have been—had they all passed into law—above and beyond the twenty new taxes embedded within the deceptively-named Affordable Care Act. Seems there’s not a proposed tax Mr. Obama doesn’t like.

By the way, don’t get too attached to your refund, if you’re due one, because the IRS and the Social Security Administration are now targeting taxpayers for their parents’ decades-old debts. No proof required. No one will cop to how this new tax-collection policy crept into the tax code, nor will they fix it. It’s resulted in hundreds of millions of dollars seized from would-be refund recipients, and a whole mess of ticked off taxpayers. You can thank your Congress for that. They either slipped it in to the tax code all covert-like, or allowed some unelected bureaucrat to usurp that power from them. Either way, it’s without our consent, and an egregious abuse of power. In case you’re battling insomnia, you can read the torturous list of Obama’s proposed taxes here. Just further proof that we need a flat tax. And a drastically shrunken IRS. Stat.

Here’s a graphic of 2013 increases in case you’re not already sufficiently depressed:

Though the low numbers of those who feel the upper income earners pay too much has remained steady, a new Gallup poll shows that a majority of Americans now feel the middle class pays too much in taxes, the highest level since 1999. And a near-record number feel lower income earners pay too little. According to this recent Gallup poll, Democrats are the only group who believe their tax rates are fair (whatever “fair” means). While small business owners like my family pay above thirty percent, and struggle each month like just about everyone we know to make ends meet, Mr. Obama, the poster child for wealth redistribution and a card-carrying member of the High Income Earners Club he loves to demonize, paid 20.4 percent of his income to the conservative-targeting IRS, and expects a whopping $19,000 refund. Certainly he’ll be redistributing that extra dough to those who need it more than he, right? But I won’t be holding my breath, for when Mr. Obama insists that we all pay our “fair share,” he means you. And me. Not necessarily himself and his cronies. The good news is that our youth seem to be awakening to the blatant lies and manipulation that define the current political culture. 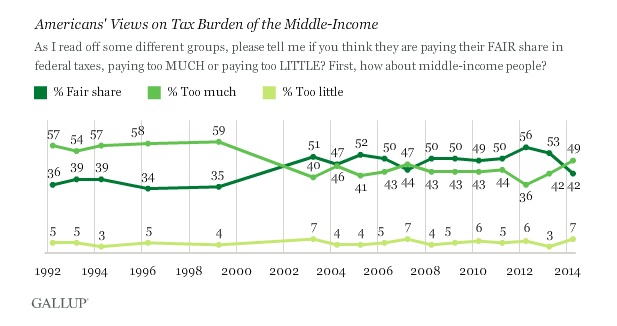 Meanwhile, as if higher taxes on all of us aren’t bad enough (money that would otherwise be circulating back into the stagnant ObamaConomy), some states are seeing upwards of 50% increases in healthcare premium prices. A quick quote on health insurance for my family of three, were we purchasing on the individual market as we were a few short years ago, yields this: A higher monthly rate, markedly higher deductible, and a quadrupled out-of-pocket expense. So much for that $2,500 in lowered premiums. By now I think we all understand that’s Obama double-speak for “Your premiums will be lower than the highly inflated prices we’d anticipated.” Though the political pundits would have us believe that ObamaCare is a “train wreck,” it’s in fact doing exactly as intended: Destroying the private market by making previously relatively affordable healthcare policies wholly unaffordable for millions, ushering in the progressive dream of a single payer system. Speaking of the ACA, you’ll recall that Mr. Obama declared that the thousands of pages of unread-by-politicians healthcare law would not raise taxes “one dime.” Seems he was right. It’s more like a boatload. You can peruse the list of ACA taxes here. And I won’t even get into the skyrocketing prices of food and energy and the stubbornly inflated gas prices under the Obama monarchy. Anyone who’s been to a grocery store or a filling station lately knows what I mean. It’s like 1979 all over again. Without the bell bottoms.

There is no doubt the Obama Administration, despite its insistence that it’s The Defender of the Middle Class, is channeling its inner Lenin with crushing taxes, fees, regulations, red tape, and steadily rising prices on everything. The ever-expanding federal government—ballooning exponentially under the current regime—has an endless appetite for our hard-earned money, much of which is mismanaged through waste and fraud, lacks oversight, and is redistributed to cronies within and without this nation. If you’re anything like me, you are loath to forcibly pay, year after year, months of your personal income into a corrupt, crony-filled system that does not represent We the People. The question is: When will we stop feeding the monster?

**UPDATE** They got caught: “The Social Security Administration is suspending a program in which thousands of people were having their tax refunds seized to recoup overpayments that happened more than a decade ago.”