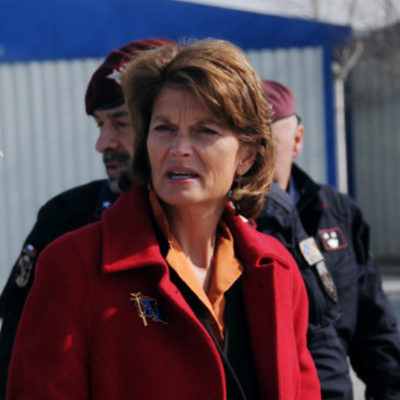 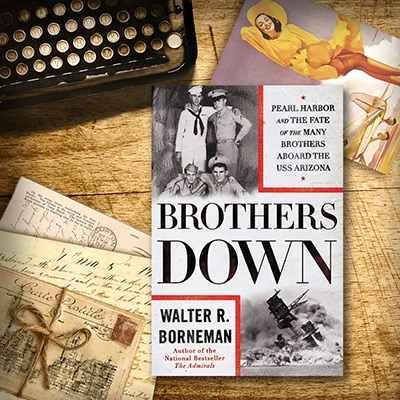 It has been 78 years since the attack on Pearl Harbor, and as we continue to watch the heroes of that generation pass away and into history, we keep learning more about the lives lost that day and the tragedy that consumed their families afterward.

Walter R. Borneman’s new book (published in May of this year) Brothers Down: Pearl Harbor And The Fate Of The Many Brothers Aboard The USS Arizona goes into details about the terrible fact that doomed so many families on that particular day – family members serving together onboard ship was allowed and often encouraged before the catastrophic losses of World War II. As a result, there were 38 sets of brothers serving onboard the Arizona on December 7, 1941, and one father-son team. Out of the 38 sets of brothers, only one family saw both sons survive.

Through research and family interviews, Borneman tells the story of 14 of these families. This also includes the story of father “Gussie” Free and his son William Free, who both perished in the attack. Survival on that Sunday morning was often nothing more than random chance, or casual decisions the night before that ended up determining life or death. As Boreman says in describing the aftermath of the attack, “death was indiscriminate” (chapter 11, “Abandon Ship!”, page 203).

Of the 337 Arizona crew members who survived the attack, about two-thirds were not aboard the Arizona that morning. They were ashore on liberty, staying in the Bachelor Officer Quarters on Ford Island, or temporarily assigned to other stations. Of the dead, more than nine hundred officers, sailors, and Marines – from Rear Admiral Isaac Kidd to just-reported-aboard Private Leo Amundson – remain entombed in the sunken hull of the Arizona. (chapter 14, “The Secretary of the Navy Regrets…”, pages 258-259)

More than one man who had stayed ashore that evening had stayed with their wives who had moved to Honolulu to be nearer to their husbands. Two men with wives ashore would end up losing brothers when the Arizona was attacked. Thomas Murdock and Harvey Becker each had two brothers serving alongside them on the Arizona. Both men lost both of those brothers that day. Marvin and Wesley Becker, and Luther and Melvin Murdock were all lost that day, leaving their brothers with survivor’s guilt and forms of PTSD.

Each of the stories of the 14 families, detailed with painful poignancy in the book, feels extraordinarily personal and sheds light on the people who were there that day – and what their families lost when they were killed. Out of those 38 sets of brothers, 13 sets had at least one brother survive the attack. The Warriner brothers of Wisconsin, Kenneth and Russell, ended up being the sole pair of brothers to both survive – and only because brother Kenneth had been temporarily assigned to signal school in San Diego (chapter 15, “Those Left To Remember”, page 266). At least two men who lost their brothers – John “Andy” Anderson and Anthony “Tony” Czarnecki – chose to be interred on the Arizona after their deaths, to rest in peace with their brother, and their brothers-in-arms.

As of the writing of Borneman’s book, there were five living survivors from the Arizona. Since then, two have passed away. One, Lonnie Cook, was buried next to his late wife in Morris, Oklahoma. The other, Lauren Fay Bruner, chose to be interred on the Arizona. (Bruner’s story of survival with the help of the crew of the USS Vestal can be read in Borneman’s book, starting on page 183.) The remaining three survivors have already said they will not be interred on the Arizona, which makes Bruner’s interment likely the last that we will ever see, barring any special circumstances.

This book is extremely easy to read, and the indexes of the sets of brothers are necessary to help keep the families and the connections straight. However, we all know how this story will end. And there is no way to lessen the emotional punch involved, especially when you are hearing such personal stories from siblings and extended family members. The Miller family of Ostrander, Ohio, lost two sons, Jesse and Stanley, on the Arizona that day. Their bodies were not recovered, and remain entombed in the Arizona.

Long after George and Mary Miller had passed on, a neighbor told their granddaughter this story. Every Memorial Day, she said, Mary Miller would leave her house carrying a bouquet of flowers and walk down a hill to the creek. Very gently, she would ease the flowers onto the flowing waters. Once, when the neighbor asked her why she did so, Mary Miller told her: “Maybe they will float into a bigger creek, and maybe then to a river, and maybe into the ocean and finally float to the place where my two boys lay.”

When Mary Vogt and her husband, Bob, visited Pearl Harbor on their own fortieth wedding anniversary, Mary dropped two flowers into the harbor. Remembering her grandmother as well as her lost uncles, she attached a simple, handwritten note: “These are from your mother.” (chapter 15, “Those Left To Remember”, page 267)

When you look at the list of names on the wall at the USS Arizona memorial, it is easy to be overwhelmed by the sheer number up there, and all that is recorded on the wall is last name, first and middle initials, and rank. There was so much more to each and every man listed on that wall. Reading Brothers Down gives one an incredible and personal sense of all that was lost, and the families devastated, when the Arizona met her end in Pearl Harbor. 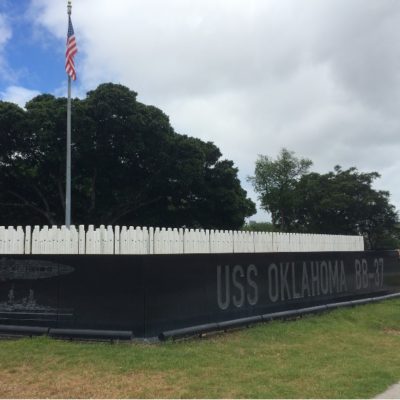 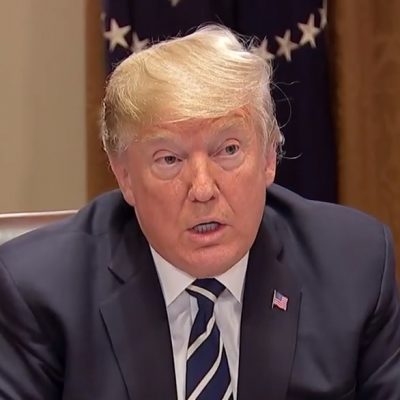