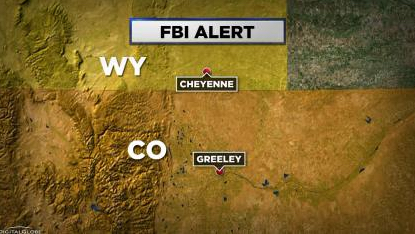 We should all be aware by now that ISIS is targeting the men and women of our military, as well as their families here at home. Last month, five of our brave servicemen lost their lives to a terrorist attack by an Islamic extremist on our own soil. It makes no difference whether he was affiliated with, or inspired by, ISIS. The deaths were highly preventable, if only we had a Commander in Chief who cared, and they’d been able to defend themselves. We also know that Islamic terrorists are already in our country, roaming around freely. And now an alert has been issued warning that “Middle Eastern” men are brazenly approaching  military family members, at their own homes, in Colorado and Wyoming. And I suspect they’re not looking for work, Marie Harf. From CBS Denver:

The alert says Middle Eastern men are approaching families of U.S. military members at their homes in Colorado and Wyoming. It mentions Greeley and Cheyenne, Wyoming as the specific areas.

The alert says Middle Eastern men are approaching families of U.S. military members at their homes in Colorado and Wyoming. It mentions Greeley and Cheyenne, Wyoming as the specific areas.In one case last May the wife of a military member was approached in front of her home by two Middle Eastern males. The men stated that she was the wife of a U.S. interrogator. When she denied their claims the men laughed. The two men left the area in a dark-colored, four-door sedan with two other Middle Eastern males in the vehicle.

“The woman had observed the vehicle in the neighborhood on previous occasions,” the alert states.

Similar incidents in Wyoming have been reported to the FBI throughout June 2015.

In case you still think there’s no threat: This video is from six years ago, and the threat has only grown under the current POTUS-in-name-only:

Obama is laser-focused on his legacy, and he’ll have a legacy, all right, but it won’t be positive for America. Coupled with our extremely porous borders, refusing to crack down on sanctuary cities, shipping in “refugees” by the truckload from the Middle East, allowing the rise of ISIS worldwide with no strategy to defeat them, reducing the size of our military to dangerously-low levels, and disarming our servicemen and women here at home while refusing to overturn that ludicrous policy in the face of imminent threats aimed squarely at them, we can bet we’ll see more and more of this. An attack on our homeland rivaling 9/11 is not an if, it’s a when. Lock and load. And keep your eyes and ears open. Because this administration will not keep us secure.