Next post
The Oso Mudslide - Heartbreak and Hope in My Backyard

by Ruthie Thompson in Headlines 3 Comments

Earlier today, Victory Girl’s reported on the silence of the media regarding the misuse of funds from Harry Reid’s campaign, Friends For Harry Reid. If you didn’t get the chance to read it, you can find it here.  Last week, Reid’s campaign received a letter from the FEC asking for the clarification of  “holiday gifts” that was listed on his year end report. Reid’s campaign was given until April 25th, to respond or face further action. It was revealed that Harry sent his grand daughter almost $17,000 from his campaign funds to purchase jewelry for his staffers. Reid has maintained that since the purchase was from a vendor (did I mention that it was his grand daughter?) – then they did nothing wrong. However, just as soon as this story broke, Reid was grabbing for his checkbook eager to pay the campaign back. Reid agreed to reimburse his campaign the almost $17,000 that his grand daughter received for the sale of her jewelry. But now it looks like Dirty Harry’s troubles have doubled.

The Las Vegas Review-Journal reported today that Dirty Harry can add another $14,481 on top of that $17,000 as a new payment to his grand daughter has surfaced from the year 2012. That brings the grand total of Dirty Harry’s dirty check to $31,268.

“I believe my granddaughter is a very talented individual and I admire her work tremendously, but I’ve decided that it would be best to pay for her work out of my own pocket,” Reid said in a statement. “My office is reviewing our records to ensure that we reimburse my campaign for the full amount.”

Very interesting Harry. Not only are you NOT waiting to see if the FEC will clear you of any wrong doing, you wait until you are caught and then you all of a sudden decide that “it will be best” for YOU to pay for those gifts out of your own pocket? Have you ever heard of a personal slush fund, Harry?

And how does Reid respond to this? He is angry. Not angry that he was asked for clarification on the funds, but angry because his precious little grand daughter, that received over $31,000 from his campaign funds is being asked some questions. Did Harry ever stop to think that we all can’t wait for formal investigations? Look where they have gotten us in the past. Sometimes we have to go to the source ourselves and get answers before an important person, pertinent to an investigation, suddenly decides to plead the 5th.  It seems Harry would like to shift the focus to his grand daughter who is the victim of a witch hunt and is being harassed.

“My granddaughter has been the target of harassing phone calls, strangers tracking her down and knocking on her door and negative, unwanted attention on the internet. This has gone too far and it needs to stop now. I deeply regret any role I had in creating this situation but now, as a grandparent, I say enough is enough,” Reid said.

Well that was enough for CNN to pick up this story just to let everyone know that Reid’s grand daughter is a victim all the while ignoring the fact that the poor little victim received over $31,000 from Reid’s campaign.

It is yet to be seen if the FEC will accept the explanation regarding Jewelry-gate since the campaign has until the 25th to respond. But Reid’s willingness to fork over $31,000 just like that, without a fight, is a clear indication that this just might spell trouble for Reid and his campaign. Or, it could end up in limbo with all the rest of the scandals waiting for someone to investigate. 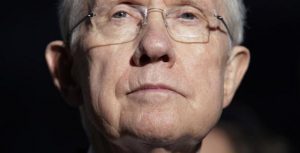