Detroit City Councilwoman to Obama: We Voted for You, Now Bail Us Out!

Detroit City Councilwoman to Obama: We Voted for You, Now Bail Us Out! 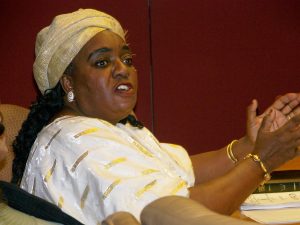 Meet Detroit City Councilwoman JoAnn Watson. Watson is your typical Obama voter: entitled, lazy, and absolutely unwilling to take any responsibility for their own actions. And the concept of the federal government spending too much money is a completely foreign one. Not only is there no such thing to these people, but they think this money belongs to them. They deserve it, simply because they voted. They took thirty seconds out of their day to pull the lever for Obama, so now they deserve a reward for their efforts.

In this case, the entire city of Detroit apparently deserves one.

The city of Detroit faces a major financial crisis and one member of city council thinks President Barack Obama should step in and help.

City Council member JoAnn Watson said Tuesday the citizens support of Obama in last month’s election was enough reason for the president to bailout the struggling the city. (Click the video player to listen)

“Our people in an overwhelming way supported the re-election of this president and there ought to be a quid pro quo and you ought to exercise leadership on that,” said Watson. “Of course, not just that, but why not?”

Nearly 75 percent of Wayne County voters pulled the lever for Obama in November.

“After the election of Jimmy Carter, the honorable Coleman Alexander Young, he went to Washington, D.C. and came home with some bacon,” said Watson. “That’s what you do.”

Nevermind that our deficits are in the trillions. Nevermind that we’re running out of money. Residents of Detroit voted for Obama, and now they want their money.

Gee, maybe Romney was right about that whole freedom vs. free stuff thing.

Watson and her accolades on the city council who cheered on her gimme-gimme speech can’t seem to fathom that perhaps they did this to themselves. Perhaps they’re in the bind that they’re in because of decades of corruption and spending. And rather than attempt to fix the problems and turn the sinking ship around, they just want Obama to come in and throw money at them. Why should they be required to take responsibility for the cesspool they’ve turned Detroit into? They voted for Obama. They deserve free stuff.