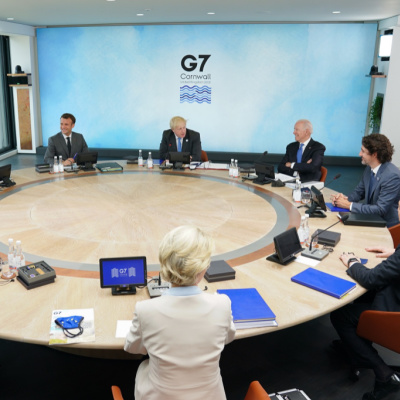 No matter how the media played it or how many nice words other G7 leaders said, Dementia Joe was on full display this week, sadly. The scenery in Cornwall was stunning. Windsor Castle is fully restored from the 1992 fire and the British troops were in their best bibs and tuckers. The G7 leaders did the mask cosplay in public and were not socially distant in private. It was politics as usual with a side of smug globalism.

Many world leaders had the same problems with President Donald Trump that the permanent bureaucracy in the U.S. did. Trump is NOKD. NOKD means “Not our kind, dear.” He’s not and will never be one of them. Trump is not a globalist. Trump is all about America First. Macron (France), Merkel (Germany), and Trudeau (Canada) are all presiding over tanking economies. They need the U.S. to prop them up. Trump would have been honest with them.

As I told you the other day, the British press is brutal and they have reported that the Labour Party (Liberals) are not impressed with Dementia Joe. Hopefully, soon the Tory Party (Conservative) will leak their thoughts. That should be fun.

At a luncheon on Friday, Joe wandered into the public portion of the restaurant. Nurse DOCTOR Jill had to come pull lost Joe away. It was thoroughly embarrassing.

Joe Biden seems to get lost at the G7 summit in England, Jill comes to the rescue @JoeBiden @G7 @FLOTUS @USAmbUK pic.twitter.com/GFxGouRCoA

It was bad enough seeing his shambolic walk in his senior citizen sneakers, but watching ambitious DOCTOR Jill pull the old fart away was painful. First Lady DOCTOR Jill Biden published a photo on her own Twitter account of her reading a G7 briefing book on Air Force One on the way across the pond. Jill wants to be President. Don’t doubt it. Jill is doing the Edith Wilson shtick now. She will run against Kamala Harris for the 2024 Democrat nomination.

In the tweet below, British Prime Minister Boris Johnson, as the host, introduces South African President Ramaphosa and then South Korean President Moon. Dementia Joe interrupts to say, “and the President of South Africa.” Johnson then gives Joe the “shush arm” twice.

Boris Johnson insists to Joe Biden that he already introduced the president of South Africa to a G7 meeting.

I cannot imagine another world leader giving even Barack Obama the “shush arm”. No matter what the world leaders say they know Joe’s elevator doesn’t go to the top anymore.

In his solo press conference, Joe said “harassing” twice when he meant “harnessing”.

Joe Biden struggles to read: “By harassing the full potential of those who are harassing” pic.twitter.com/I8sg3om5R5

He also told the world press that a lot of people may not know what Covid is!

"A lot of people may not know what COVID is" – Joe Biden pic.twitter.com/YijAK0r3GA

To truly understand how limited Dementia Joe is, watch this 12 minute video of Joe and DOCTOR Jill meeting Queen Elizabeth. The Queen is 17 years more senior than Joe and she looks far more hale than he does. He gets lost when he goes to inspect the Grenadier Guards. And, oh my stars, he keeps trying to take the Queen’s elbow when they exist the pavilion.

The Queen looks so well for a 95 year old woman who just lost her husband. Dementia Joe looks diminished and de minimus. I don’t give a farthing what other world leaders or the U.S. press say, Joe is an embarrassment and Jill should be charged with elder abuse.

By the way, Vladimir Putin isn’t fooled and he has the receipts.