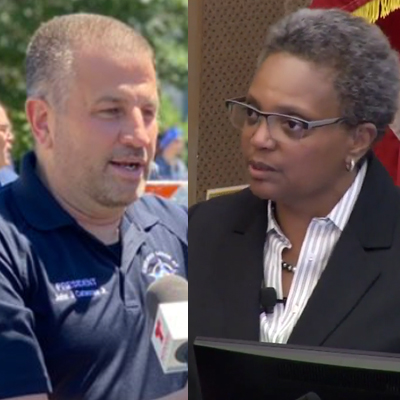 It’s on: Chicago mayor Lori Lightfoot ordered Chicago police to get their Covid vaccines and report their status by Friday. Otherwise they’ll have to stay home. But Fraternal Order of Police president John Catanzara told her to pound sand.

On Thursday evening, Lightfoot filed a complaint against Catanzara:

“Yesterday, at my direction the City of Chicago’s law department filed a Complaint for Injunctive Relief against the Fraternal Order of Police Lodge 7 and its President John Catanzara for engaging in, supporting, and encouraging a work stoppage or strike.”

“As Chicago’s Mayor, I cannot and will not stand idly by while the rhetoric of conspiracy theorists threatens the health and safety of Chicago’s residents and first responders.” 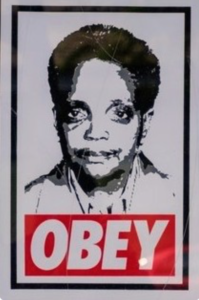 But the FOP told Lightfoot to Bring. It. On.

President John Catanzara has never engaged in, supported, or encouraged a work stoppage. @LoriLightfoot is the only one who has said she will send our dedicated Officers home without pay if they choose to reject her unlawful orders.

Hold the line, CPD, like you always do. https://t.co/DPQtqjegcn

Meanwhile, the FOP has filed their own motion to dismiss the complaint.

IL Gov. J.B. Pritzker, aka Commodius Maximus, has weighed in on the kerfuffle, promising to send in the National Guard in case of Chicago police shortages.

Remain calm, all is well. pic.twitter.com/hHusYpXhcu

Never mind that when Chicago was burning in the summer of 2020 during the St. George Floyd riots, nobody sent in the Guard then. In fact, President Trump offered help to Lightfoot, and she dismissed him. No way was she going to accept help from the Orange Man.

But on Thursday night, leaks from Chicago aldermen hinted that Lightfoot was beginning to crack, wavering on her threats of “no vaccine, you’ll be sent home without pay.” On Friday morning, she said she won’t send them home or withhold their pay after all. Besides, it would take days to sort out who received the vaccines and who didn’t. Meanwhile, Lightfoot is waiting a judge to rule as to whether or not Catanzara tried to “foment an illegal work stoppage or strike,” thereby putting the city of Chicago in danger.

That’s a joke. Chicago already is a dangerous place. So far this year, the city has totaled 679 homicides, which has already surpassed last year’s butcher’s bill of 676 — and there’s still two and one-half months of 2021 to go. And presiding over this carnage is Cook County State’s Attorney Kim Foxx, the recipient of donations from George Soros’s foundation.  Her catch-and-release policies allow violent perpetrators go free.

Then there’s Lightfoot herself, whose failure to support the CPD during her tenure have caused the cops to view her with disdain. She has ordered them to work 12-hour days, as well as taking their vacations. Cops even turned their backs on her after one of their own was recently shot and killed during a traffic stop. The killer was a criminal who should’ve never been out of prison.

So now, even though many police have already taken the Covid vaccines, they sure as hell don’t want to tell City Hall about it. Can you blame them?

As a result of Lightfoot’s treatment of the CPD, Catanzara notes that Chicago already has 1000 fewer members on its police force. Not only that, but 38% of the current force — about 4300 officers — have put in their 20 years and can retire with full pension. They don’t have to take crap from Lori Lightfoot.

“If this mayor doesn’t stop vilifying the police and start focusing on public safety, you are going to have a rash number of retirements in the very immediate future here because officers just aren’t going to take it anymore. That is going to risk everybody’s safety, and that’s not going to be our fault.”

It appears that John Catanzara has put Lori Lightfoot between that proverbial rock and a hard place. But this is the stubborn and irascible Lightfoot we’re talking about here. She just may get into her clown car once again for another game of chicken with the 18-wheeler of the FOP.