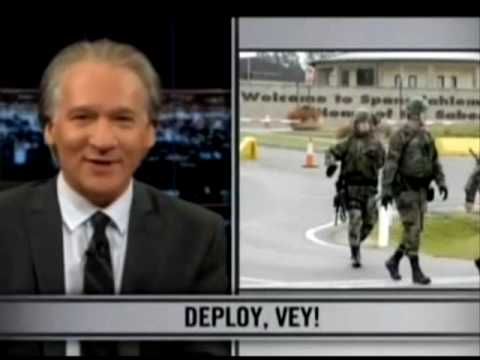 I don’t know why Bill Maher still has a platform. Well, no, I take that back. I know why he does; it’s because he’s a liberal and he spews liberal shit out of his mouth on a regular basis, and the liberals at HBO love it. But he’s sunk to yet another despicable low slandering our troops. It’s not like it’s the first time — remember when he called our troops “cowards” right after 9-11?

Maher replied: “We have been the cowards. Lobbing cruise missiles from two thousand miles away. That’s cowardly. Staying in the airplane when it hits the building. Say what you want about it. Not cowardly. You’re right.”

Of course, those comments were “misinterpreted”. He wasn’t called our pilots cowardly, it’s just that us idiot hicks in Flyover Country are not sophisticated enough to understand it.

And perhaps that will explain his next little joke that had the members of his audience laughing. Maybe I’m just not enlightened enough to find it funny. Check out this video and see if you’re laughing:

You know, I’d like for Bill Maher to go to, say, Camp Lejeune and say that. Maybe he could go to Norfolk. If you want to talk about someone who is a flaming coward, then look no further than the shitbag on HBO. In front of his adoring liberal audience who laughs at his libelous troop-smearing jokes, he’s perfectly comfortable saying such vile things. He’d never have the courage to say something so disgusting to a soldier though, would he?

You can e-mail HBO here. Contact their Consumer Affairs office at 212-512-1208 between 9:00am and 5:00pm Eastern. Make your voices heard. It’s unlikely that Bill Maher will get kicked off — although hey, it couldn’t hurt to try — but maybe we can force the assclown to at least make a public apology. He owes much more than that, but I’ll take what I can get.

By the way, make sure you’re showing your support for our troops. Adopt a soldier from Soldiers Angels or a unit from Any Soldier.