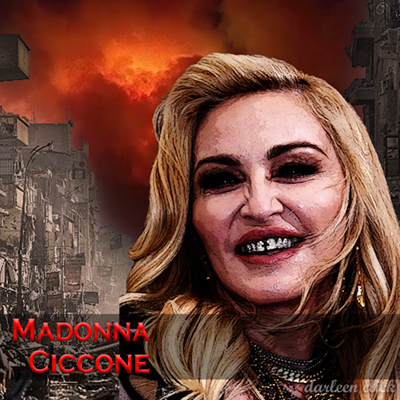 “Like a gold ring in a pig’s snout is a beautiful woman who shows no discretion.” ~~ Proverbs 11:22

The ultimate Material Girl of the 1980’s, Madonna Ciccone never let mediocre talent get in the way of her insatiable appetite for attention. And, boy howdy, does the now 63 year-old take the word skank to new depths of depravity.

For the Material Girl’s latest desperate, filthy arts-and-crafts project, she has released three NFTs (or nonfungible tokens, the dumb internet trend that I refuse to accept or understand) of a 3-D-animated version of herself completely nude, spread-eagle and giving birth to centipedes and full-size trees. (snip)

The 80s were a continuation of the 70s — ironed hair and bell bottoms replaced by shoulder pads and big hair, but the excesses of nihilistic pleasure-seeking became much more mainstream and celebrated.

Madonna, who has always looked like she’s one week past her last encounter with a shower, was one of those AquaNet, bedazzled, AM-radio female popsingers who were as easily replaced on the charts as the latest tweener Boy Band. But Madonna refused to let her brand of ephemera — a brand built on looks and shock — fade away.

As each decade moved on, Madonna fought to stay relevant, or at least in the press, with ever increasing moments of shock and cringe. Burning a cross, publishing a sex book of her own photos, posing topless in bed with boytoys, swapping spit on stage with other female performers, and exposing ever more flesh in public even as she is beyond the age of the average grandma.

But when you base your life on your looks as a substitute for talent and principles, that’s all you end up with.

And Madonna’s fetish with her own body parts —

Really? Immortalizing your vulva with a 3D scan?

— is beyond just a cringe moment. It is another indication on how broken the culture and how denigrating it is of both women and men. Madonna certainly hasn’t empowered anyone, least of all young girls struggling with all the issues that come with puberty. How inspirational is it to show that, after 60 decades on this planet, you too will need to flaunt your naked buttcheeks in order to have someone maybe pay attention?

The nihilism would be staggering if it weren’t so ubiquitous and celebrated.

There is nothing we can do about time and our own aging. But we do have power over the choices we make and how those choices affect others — for good or ill. Both men and women are faced with some pretty big decisions on how this country will fare over the next few decades. Do we stop our descent into the world Madonna embodies or do we just pour another glass of wine, book another facelift, and take another happy pill? We do possess the power to make those changes.