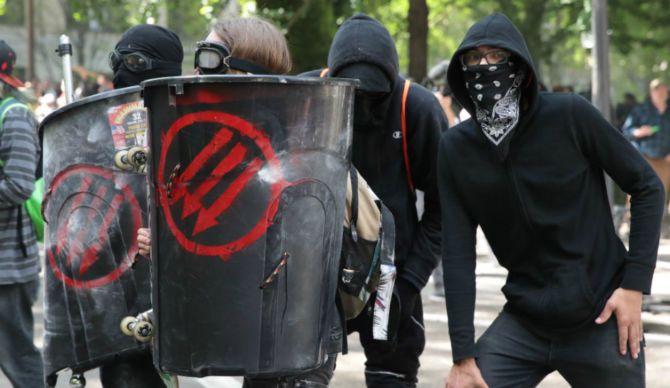 Previous post
If AntiFa is a "Gift" to the Alt-Right, Who Brings "Gifts" to AntiFa?

The mere existence of supporters of President Trump is violent, so it is OK to attack them with baseball bats. The Times reporters show no sign of disagreeing with this “reasoning.”

There appears to be no end to stupidities…

Traveler, USC’s mascot, comes under scrutiny for having a name similar to Robert E. Lee’s horse.
[…]

At the rally, according to the student newspaper the Daily Trojan, Saphia Jackson, co-director of the USC Black Student Assembly, asked students not to be quiet, and reminded that “white supremacy hits close to home” and referenced the name of the Trojans mascot.

However, this is now beyond facepalms and laughing. We are now facing watching the internet being purged of WrongThink …

Google revealed in a blog post that it is now using machine learning to document “hate crimes and events” in America. They’ve partnered with liberal groups like ProPublica, BuzzFeed News, and the Southern Poverty Law Center (SPLC) to make information about “hate events” easily accessible to journalists. And now, there are troubling signs that this tool could be used to ferret out writers and websites that run afoul of the progressive orthodoxy.
[…]

In other words, nice website you’ve got there. It would be a shame if anything happened to it.

To summarize: Liberal ProPublica, working with the smear merchants at SPLC — powered by Google — sent a reporter out to issue not so veiled threats against conservative websites. It’s blatantly obvious that the goal here is to tank websites they disagree with by mounting a campaign to pressure their advertisers and tech providers to drop them as clients. This comes on the heels of Google, GoDaddy, CloudFlare, Apple, and others singling out alt-right sites for destruction in the wake of the Charlottesville riots.

“Orwellian” has been an overused phrase, but I can’t think of another one better suited to the newest moves to establish a Ministry of Truth along with violent street thugs acting as Thought Police.

This isn’t going to end well.