Previous post
That Depends on Your Definition of "Keep"

The Benghazi Survivors – Speaking Out

The Benghazi Survivors – Speaking Out

Dead men tell no tales.  And Hillary Clinton and Barack Obama prefer it that way. 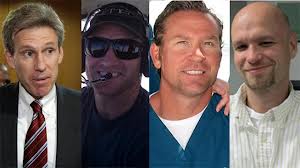 But there were badly injured survivors of the attack on Benghazi and they are finally speaking out.

“While the sessions are not open to the public, sources told Fox News that the timeline offered by some of the contractors may differ from the public narrative that there were two distinct waves to the attack – first at the consulate at approximately 9:40 p.m. local time and then at the CIA annex the following mroning, separated by a lull in the fighting.

The fighting was characterized to Fox news as being more “constant, consistent” throughout the attack’s seven-hour duration.  If there was no lull in the fighting, it raises more questions about the lack of a significant military response to the Benghazi assault — during that time, Stevens’ whereabouts were unknown.”

Anybody following the aftermath of lies and cover-up regarding the Benghazi slaughter of Americans with frustration and outrage will welcome the coming revelations.

While Christopher Stevens, Glen Doherty, Tyrone Woods, and Sean Smith did not live to tell the truth about what really happened in Benghazi, hopefully the survivors will speak out clearly and passionately about being abandoned by an amateur Secretary of State and a politically self-absorbed President – who wants to be charge of everything but responsible for nothing.

All the victims of Benghazi, dead and wounded, deserve answers.  All Americans need answers.  Enough of the President’s rejection of his responsibility for Benghazi.  Enough of him hiding behind a pantsuit.  Enough of the repeated declarations he knew nothing.  He’s lying.  Hillary Clinton is lying.  Lying liars.