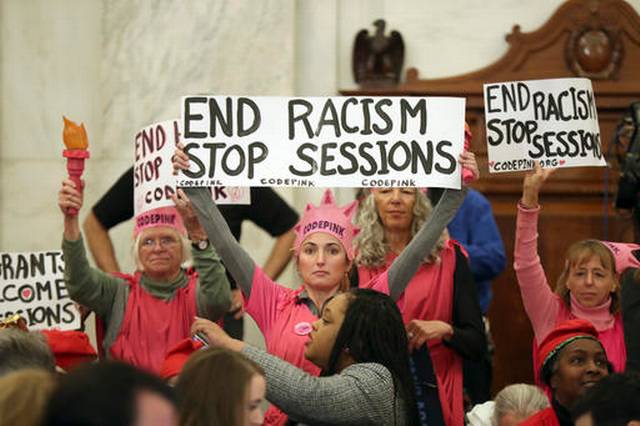 It seems the confirmation hearing for Senator Jeff Sessions brings out the classless idiots. No, I’m not talking about Chuck Grassley or Diane Feinstein. I’m talking about the KKK, Code Pink, and some jerk with MTV. Seems they have a bone to pick with Senator Sessions and figured trying to stop his confirmation, or accuse his granddaughter of being a prop was a grand idea. Yeah. NO.

Its really almost comical. Here is the KKK, an overtly racist organization, attempting to stop Sessions confirmation as Attorney General. What’s comical you ask? They want the removal of a man who aided in the successful prosecution of the head of the KKK in Alabama.

“It was because of Jeff’s willingness to help us that Hays and [accomplice James “Tiger”] Knowles were indicted. Down the road a guy named Frank Cox who provided the rope was also indicted, and the leader of the Klan at that time, Henry Hays’s father Bennie Hays was also indicted.”

According to Galanos, securing Henry Hays’s conviction was a long, involved process, and the resources Sessions provided helped break the case wide open.

In other words, the KKK is protesting Senator Sessions because a federal grand jury found one of their great leaders guilty of lynching an innocent black man and was sentenced to death for his role in that killing. In my opinion, their protest is a tacit admission that they thought Michael Donald’s lynching by KKK clan leader Henry Hays was a ‘good thing.’ Like I said…comical.

And then we have Code Pink. Yeah…they surfaced. 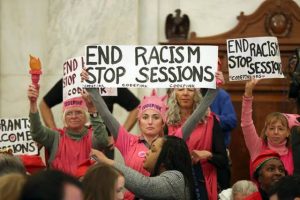 Desperately trying to regain relevance they exhibited their own brand of clown show.