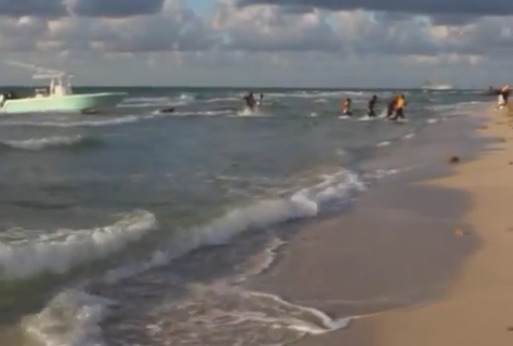 They were in Miami Beach, at 6 a.m, shooting a video. Then a small boat, filled with what looked like fisherman, entered the frame. Ekaterina Juskowski, who was filming her model friend, thought to herself, “They are ruining my video.” Well, they weren’t fisherman. Watch what happened, from the Broward Palm Beach New Times:

They made it safely into the city and disappeared.

U.S. Border patrol had this to say in response:

U.S. Border Patrol spokesperson Frank Miller said, “That’s a testament to how confident these organizations are — what we call transnational criminal organizations — who smuggle criminals and narcotics right onto the beach.” He said the incident was under investigation and noted, “There has been an increase in known maritime smuggling in Florida — from Key West all along the Florida coast — from fiscal year 2014 to now.”