Not content to target bakeries, photographers, florists, and pizza shops, the gay lobby is taking aim at what they consider their ultimate trophy: the Christian church. 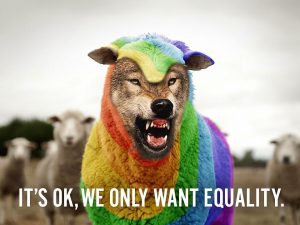 Dowling Catholic High School in West Des Moines, Iowa, has decided not to hire an openly gay teacher, and the gay rights mob became outraged. Some 150 students, alumni, and out-of-town supporters participated in a rally to protest Dowling’s refusal to hire substitute teacher Tyler McCubbin, an openly gay man who intends to marry his same-sex fiancé (or is it fiancée?).

In a letter to parents, Des Moines Catholic Schools superintendent Luvern Gubbels wrote that McCubbin’s lifestyle was “at odds with Church teaching,” and that “The Catholic faith is central to our mission, and in order to deliver on that mission it is our expectation that staff and teachers support our moral beliefs.”

Bishop Richard Pates of the Diocese of Des Moines sent out a press release, stating:

The Catechism of the Catholic Church calls for us to accept those with same-sex tendencies “with respect, compassion and sensitivity.” Such an approach has guided the school’s relationship with the applicant in question. We wish him only well. (Catechism of the Catholic Church #2358)
While we respect all persons and civil law in regard to civil unions, the Church teaches based on natural law, Scripture and the Church’s 2,000-year tradition that marriage is a sacrament between a man and a woman. The Catholic faith is central to our mission as a Catholic school and is an exercise of religious liberty. To deliver on that mission it is our expectation that staff and teachers support our moral beliefs as they are the models of our Catholic faith.

No matter. Several students organized a walkout, one of them a 16-year-old sophomore girl who said, “This is not just about someone getting rejected, this is about love. We cannot let this issue slide without voicing that love.”

This is not the only time Catholic schools have been caught in the crosshairs of student protestors, who are either ignorant of the Church’s teachings, or have decided to reject them in favor of the trendy gay Zeitgeist. In January, 2014, a Seattle-area Catholic high school vice principal was let go after it was discovered that he married his boyfriend.  A St. Louis-area Catholic music teacher was fired in 2012 when he was planning to marry his lover in New York state. Both firings resulted in protests and anger by students and parents.

And now gay students at Christian high schools are getting into the act.