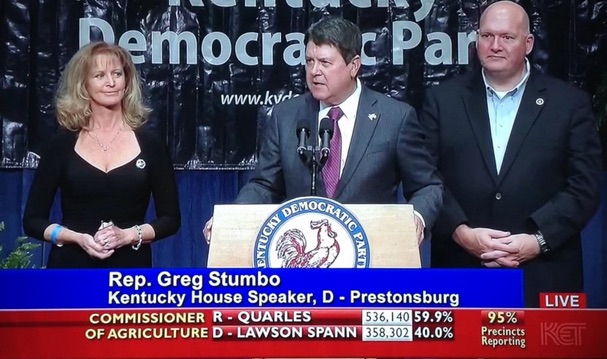 It looks like Barack Obama’s legacy took another whomping last night. This time it was in the race for the governorship of Kentucky, a seat firmly held for more than four decades by Democrats, and just one Republican. And it wasn’t just your average milquetoast Republican who beat Democrat Jack Conway, it was the man who challenged, and lost, to powerful Kentucky Senator Mitch McConnell just last year: Conservative, Tea-Party backed candidate, Matt Bevin. And now the country looks even redder this morning, due in no small part to the far-left progressive disaster known as Barack Obama. Check it out:

And the top Kentucky Democrat’s response to the governor’s race in his state going to the GOP candidate—in a rout I might add—was nothing short of, well, bizarre:

Yeah…And that, my friends, is what an epic, leftist, nonsensical hissy-fit looks like. Great job taking a chance on a new voice for freedom, Kentucky. And a huge congrats to Governor-Elect Matt Bevin, and his Lieutenant Governor-Elect, Jenean Hampton. You’ve both made history.

It’s election night, and even though it’s an “off” year, Kentucky was holding its gubernatorial election. And the Republican candidate has won the seat away from the…