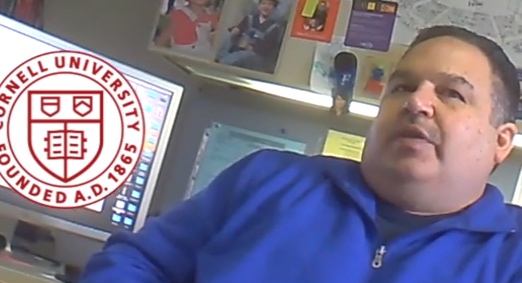 James O’Keefe’s Project Veritas has done it again. And his latest video may be the most frightening, outrageous one to date. You see, Joseph Scaffido, Assistant Dean of Students at Cornell University, recently had a chat with what he thought was a student. The subject? A campus group the young man was interested in forming. Turns out that “student” was really a Project Veritas undercover investigator. Take a look:

Did you catch all of that? Among the other hair-raisers, the Assistant Dean is OK with sending “care packages,” including electronics, to terrorists. You know, the “freedom fighters” whose goal it is to murder every single one of us, and raise its flag above our White House. Last I checked, aiding and abetting one’s enemies was called “treason.” Ironically, here’s the definition of treason, from Cornell’s own website.

To be fair, maybe Mr. Scaffido is really a deep-cover CIA agent gathering intel on campus groups who give aid and comfort to Islamic terrorists. Or…maybe he’s just another Far Left, political correctness-infested, university liberal. I can just hear the ISIS Club mantra now: “Join us for beheadings in the Quad!” Yeah, I’m going with the latter.