Salon: Climate Change Is What’s Wrong With Our Classrooms

Salon: Climate Change Is What’s Wrong With Our Classrooms 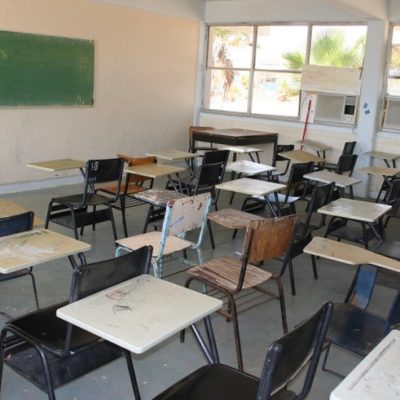 Rising temperatures due to climate change are causing more than just uncomfortably hot days across the United States. These high temperatures are placing serious stress on critical infrastructure such as water supplies, airports, roads and bridges.

One category of critical infrastructure being severely affected is the nation’s K-12 schools.”-Paul Chinowsky, Salon

Yeppers. Climate Change is the big threat and schools are heating up as the planet cooks and we, as a nation, get ready to spontaneously combust. This threat is looming in public schools, Salon claims and schools should protect students from the dangerous elements of the outdoors such as “extreme storms and severe temperatures”. And, the students’ tax-paying parents? We should have no say in curriculum and which books our kids are able to check out in libraries of our public schools because kommunisticheskoye gosudarstvo (The Communist State) knows better…or something like that. Right, Terry McAuliffe? But climate change is the real issue here.

According to this, Chinowsky and his colleagues state this will cost public schools across the country over $40 billion dollars by the year 2025 and that “oil and gas executives caused the climate crisis”. But wait, there’s more. Here’s the word we were waiting for…

In this regard, classroom environments become an equity issue. While the increase in temperature may affect all children, the relative impact of the increase and the ability to adapt is not equal.”-Paul Chinowsky, Salon

There it is. In the name of equity, schools will need to be retrofitted with new systems or A/C systems will need to be installed. Wait, hold up a hot and balmy second. Wasn’t air conditioning considered privilege by our moral betters, Salon?

“Is air conditioning a privilege or a growing necessity?” During a historic heat wave, @ericdeanwilson‘s reporting on the ecological cost of comfort has sadly never been timelier. https://t.co/9SuFOlCOD5

Salon even proposes that more schools on hotter-than-normal days will be forced to go to (GASP) remote learning again. Well, imagine that. Color me shocked that this would also be thrown out on the table. Seriously, haven’t these kiddos suffered enough?

This is what liberals who read Salon want to focus on. Climate change and the impact of student learning on public schools in hot classrooms. And of course, people need to act quick on this. We, the people, need to vote for more bonds to get these schools up to standard so our kids don’t roast by 2025. Meanwhile, it’s 2021 and we have other problems.

Suddenly, liberals are worried about a child’s ability to function in an excruciatingly hot classroom? Poor Little Johnny the Kindergartener with the mask on his face may pass out in this heat! The horror! But Poor Little Johnny the Kindergartener will continue to have to wear said mask on the 85-degree day in late spring because his state mandates he wears one or he gets sent home with a nastygram to his “birthing person”, little disease vector that he is. We have students falling severely behind in the classroom because they are being sent home for days on end because they caught the great plague or were in close proximity to those who caught the ‘Rona, as determined by faulty contact-tracing systems. We have teachers going unhinged in classrooms telling our students that they are going to kill someone if they don’t get a jab in the arm. On their off-time, these teachers are attending trainings (furnished by their districts and, begrudgingly by some parents, the taxpayers) regarding CRT, SEL and other acronyms in the name of this thing they call “equity”. Kids are fighting in schools citing “racial differences” because our schools and administrators are magnifying these differences and calling attention to them rather than embracing them with these trainings. Let’s not even discuss the early sexualization of young, pre-pubescent children and the revision of history.

But, oh, the climate! Never we mind lower aptitude on reading, writing and arithmetic because of all of the other hot-air woke our public schools are dispensing. Should we venture into the sheer numbers here, Salon? What was the figure you quoted? $40 billion? Where’s that money coming from? Perhaps President Pudding Pop can print more money? And will the supplies come in by 2025? And, assuming our supply chain improves, will there be enough labor and individuals not on the government printed money to work and install these systems?

Salon writers in their air-conditioned Brooklyn flats think climate change is the issue in our classrooms. This air is growing thicker and my palms are getting clammy. Pass me the smelling salts. I think I’m a gonna swoon.