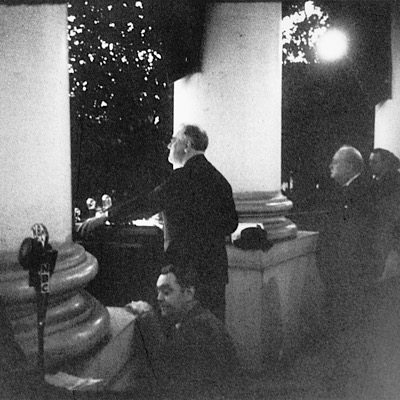 by Kate in holidays 4 Comments

It was Christmas time 1941 and someone special was coming to the White House for a secret visit with President Roosevelt.  It’s been said that even his wife, Eleanor, didn’t know who the visitor was, though in retrospect, the order for fine champagne, brandy, and whiskey should have been a dead giveaway.

The veil of secrecy was lifted after Winston Churchill was safely at the White House.

The times were perilous. War in Europe was raging, where by the end of 1940, Nazi Germany controlled most of France, Central Europe, Scandinavia, and North Africa, and was severely threatening Great Britain. And now the US,  previously with a posture of isolationism, had declared war on Japan.

Shortly after the Japanese attack on Pearl Harbor,  Winston Churchill went to Washington (the first of his five trips) with his chiefs of staff to meet President Roosevelt and his military leaders, in an effort to persuade coordinated plans for the defeat of the common enemy. The Prime Minister, ever a shrewd strategist, wanted to sway President Roosevelt (and the American people) into lending a hand in the battle against the Nazis, as opposed to focusing solely on the hard fight ahead in the Pacific.

He certainly did that.

On Christmas Eve, both President Roosevelt and Prime Minister Churchill broadcast to the world, reaching millions by conventional and shortwave radio, from the White House on the 20th annual observation of the lighting of our nation’s Christmas tree.

President Roosevelt, who gave a powerful speech, reminded the audience:

Our strongest weapon against this war is the conviction of the dignity and brotherhood of man which Christmas Day signifies—more than any other day or any other symbol.”

He continued, “Against enemies who preach the principles of hate and practice them, we set our faith in human love and in God’s care for us and all men everywhere.”

Here’s video of both speeches from that night 80 years ago.  First up, President Roosevelt.

And then Prime Minister Churchill was introduced.  Below is the full transcript of his speech. And like so many of his speeches, it’s just incredible.

I spend this anniversary and festival far from my country, far from my family, yet I cannot truthfully say that I feel far from home.  Whether it be the ties of blood on my mother’s side, or the friendships I have developed here over many years of active life, or the commanding sentiment of comradeship in the common cause of great peoples who speak the same language, who kneel at the same altars and, to a very large extent, pursue the same ideals, I cannot feel myself a stranger here in the centre and at the summit of the United States.  I feel a sense of unity and fraternal association which, added to the kindliness of your welcome,  convinces me that I have a right to sit at your fireside and share your Christmas joys.

This is a strange Christmas Eve.  Almost the whole world is locked in deadly struggle, and, with the most terrible weapons which science can devise, the nations advance upon each other.  Ill would it be for us this Christmastide if we were not sure that no greed for the land or wealth of any other people, no vulgar ambition, no morbid lust for material gain at the expense of others, had led us to the field.  Here, in the midst of war, raging and roaring over all the lands and seas, creeping nearer to our hearts and homes, here, amid all the tumult, we have tonight the peace of the spirit in each cottage home and in every generous heart.  Therefore we may cast aside for this night at least the cares and dangers which beset us, and make for the children an evening of happiness in a world of storm.  Here, then, for one night only, each home throughout the English-speaking world should be a brightly-lighted island of happiness and peace.

Let the children have their night of fun and laughter.  Let the gifts of Father Christmas delight their play.  Let us grown-ups share to the full in their unstinted pleasures before we turn again to the stern task and the formidable years that lie before us, resolved that, by our sacrifice and daring, these same children shall not be robbed of their inheritance or denied their right to live in a free and decent world.

And so, in God’s mercy, a happy Christmas to you all.”

In the days following his Christmas Eve speech, Churchill addressed a joint session of Congress, which would become an iconic moment where relations between the USA and the UK became stronger than ever before – cementing our alliance and resolve – lasting to this day.

Those two weeks spent together at Christmas time in ’41 would eventually forge a bond and create the blueprint to win the war: Roosevelt and Churchill eventually inked a Europe-first strategy to defeat the Nazis before imperial Japan and a joint move on North Africa.  They would also agree on the United Nations Declaration — the main treaty that formalized the Allies of World War II, signed by 47 national governments between 1942 and 1945.

And the rest as they say is history. Our incredible, exceptional history. Fast forward 80 years and YES. May we always live in a “free and decent world”.

Nashville: The Police and The Christmas Miracle

Letters from The Front – Christmas Edition

Christmas Eve: Thankful but Not Silent

Merry Christmas! From Our House to Yours

A Moment of Peace: The Christmas Truce of World War I