Previous post
Feministing: We Know Nothing About the Military... But Do What We Say! 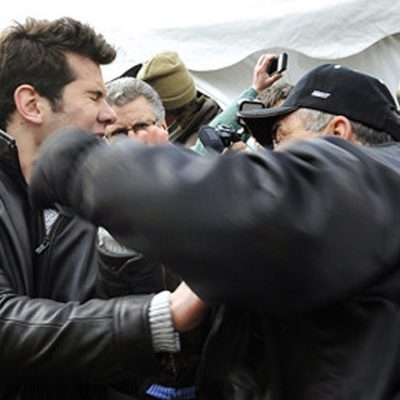 According to Politico, the iWONtwice American Idol president and that creepy anti-American, pro-capitalist, Gangnam style rapper Psy, shared the stage in Washington on Sunday. Puke. The South Korean 1-song wonder, wearing a lovely red shiny top, shook hands with Barack Obama after performing for the First Family during the “Christmas in Washington” concert held at the National Building Museum. Thank god they didn’t dance together.

As you probably know by now, Psy hates Americans. And he REALLY hates out military. Hm. Similarities? Shortly after his success over that ear worm Gangnam Style video, reports surfaced that he had participated in concerts which protested the U.S. military presence in South Korea during the early stages of the Iraq war. At a 2004 concert he rapped about killing “Yankees” who have been torturing Iraqi captives and their families. Psy says the protests were part of a “deeply emotional” reaction to the war and the killing of two Korean school girls. He says he “will forever be sorry for any pain I have caused by those words.”

Sorry for the words but not the sentiment? Seriously? FACE PALM. Here are some the lyrics and the video to his hateful song against our military:

After learning about this disgraceful sentiment Psy has about the US and her military, there was a lot of backlash about having him perform at the “Christmas in Washington” concert. So why was his invitation to participate in the “Christmas in Washington” concert not rescinded? You sing about killing US troops and families, no matter the context, you don’t get to come to the White House and sing for an American President… except in the age of Obama. Sadly, we’ve learned this, over the years, by the way Obama treats our friends AND our enemies. 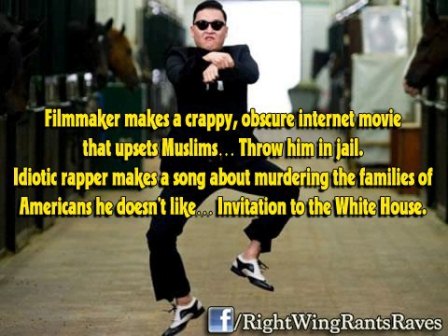