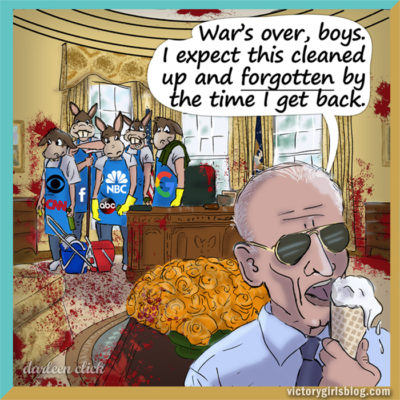 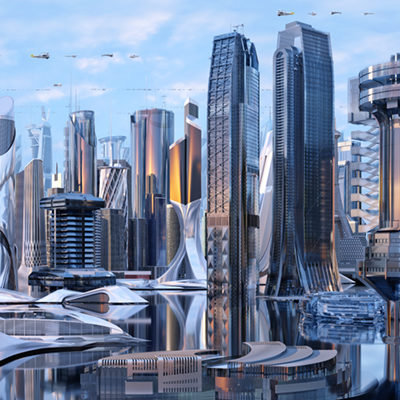 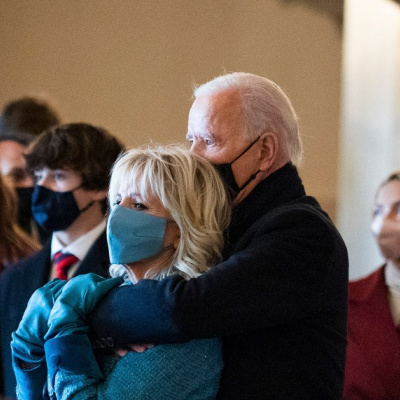 On Thursday night, Joe Biden and DOCTOR Jill Biden visited Walter Reed National Military Medical Center in Bethesda, Maryland. They were there, allegedly, to visit the U.S. Marines who were wounded a week ago in the bomb attack at Harmid Karzai International Airport. The bombing where 13 military personnel were killed. Dementia Joe’s handlers should learn to read the room, so to speak.

Biden’s handlers are confident that the media will not report any negative interactions that the Bidens may have with the Marines. Just like the media largely ignored the contempt with which the families of our fallen at the dignified transfer last Sunday. Our Kim’s post on that unfortunate experience can be read here.

Last night’s visit to Walter Reed was not on the schedule and was only publicized after the duo arrived at the medical center:

I’m here with Biden at Walter Reed military hospital. The trip was a secret, but now that he’s here, it can be disclosed. He has been critcised for his Afghanistan policy, and he’s here visiting the wounded. Officials carried bouquets of flowers inside. https://t.co/EBPSmw9Zv3 pic.twitter.com/bJjgxtEYzD

Awww, they brought the Marines flowers. Gag me with a spoon, Tara Mckelvey. U.S. Marines don’t want bouquets of flowers. They want a Commander in Chief who gives two f**cks about them. They want their CinC to understand geo-politics and strategy. They want their brothers and sisters in arms alive and well. They want their sister holding a baby and saying she loves her job, not laying in a mortuary in Dover, Delaware. Do these people have any self-awareness or sense of propriety? Don’t answer that. We know the answer. Nicole Gee meant nothing to them.

The 15 Marines at Walter Reed arrived from Germany. According to WJLA.com:

Maj. Jim Stenger, a Marine Corps spokesperson says, “of those, one is in critical condition, three are in serious condition, and 11 are in stable condition.”

Now, it is tradition for the President to visit hospitalized military personnel. Creepy Joe’s wife, DOCTOR Jill might have wanted to talk him out of this visit, if he even knew where he was. Now, there are some wags on the internet who think was that this was really a visit for real doctors, unlike DOCTOR Jill, to see Dementia Joe and maybe do some tests. But, we are going to pretend that the Biden/Harris White House told us the truth this one time. And, “Where in the world is Kamala Harris?” That’s sung to the tune of the old PBS show, “Where in the world is Carmen Sandiego?”

According to the Walter Reed website, currently, no visitors are allowed. You may get a special permit if you are assisting a patient as a caregiver, but the Covid protocols are pretty rigorous. But, the asterisk sitting in the Oval Office gets a special pass.

Wouldn’t you love to have your handy Harry Potter “Cloak of Invisibility” when Creepy Joe visits those 15 wounded Marines? They are beginning to deal with their injuries and grieving the loss of the teammates and here comes the walking skeleton who approved the mission that wounded and killed them. They were on the ground at Kabul. They know, just as Dementia Joe knows/knew/was told, that there was a warning of over twenty-four hours that a bombing was coming. They know what Dementia Joe did. They know what SecDef Austin and Chairman Milley did. They know who is responsible for their injuries and the deaths of their brothers and sister. They know they were put in a kill-zone. They know IT ALL.

The wounded Marines probably have not seen Joe’s victory speech from the other night. Let’s hope they haven’t:

On January 29, 2021, Joe Biden visited Walter Reed and every article led with the fact that his son, Beau, had died at the medical center in 2015. We know, from the reports of the families at Dover, that Biden talked about Beau to them. What’s the over/under on Joe bring up Beau to these wounded Marines? What’s the over/under on Joe checking his watch?

On the other hand, the visit began after 8:00 p.m.. My guess is that these wounded warriors have been given the their sleepy time meds. Even if Joe tries to talk to them, they will be in the Halcion district reliving their trauma and won’t hear him. There is a God and he is merciful. That’s my thinking.