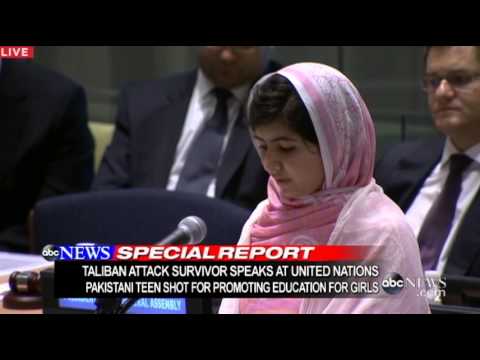 It was her 16th birthday, one that the Taliban tried hard to make sure she never saw. But on Friday, July 12, 2013, Malala Yousafzai gave her first public speech to over 500 children at the United Nations in New York City and delivered a petition to the UN Secretary-General, demanding on behalf of all young people, that world leaders agree to fund new teachers, schools and books and to end child labor, child marriage and child trafficking. It was “Malala Day” at the UN.

You know about her. Her story is remarkable.

Malala Yousafzai was only 11 when she started blogging under the pen name of “Gul Makai” about life under the Taliban. Even back then, she was quite an activist for girls’ education in Pakistan, writing a blog post published by the BBC about how she wanted to go to school but was afraid. Here’s a Journal excerpt from 2009:

“I had a terrible dream yesterday with military helicopters and the Taliban. I have had such dreams since the launch of the military operation in Swat. I was afraid going to school because the Taliban had issued an edict banning all girls from attending schools. Only 11 students attended the class out of 27. The number decreased because of Taliban’s edict.

On my way from school to home I heard a man saying ‘I will kill you’. I hastened my pace… to my utter relief he was talking on his mobile and must have been threatening someone else over the phone.”

About that time, the Taliban issued a formal edict, which covered her home in the Swat Valley, banning all girls from schools. On the blog, Malala praised her father, who was operating one of the few schools that would go on to defy that order. She started giving interviews with news outlets, including CNN. She was only 14 then.

Then, on October 9, 2012 Malala was riding home in a school van in the Swat Valley, which as we all know is a Taliban stronghold in Pakistan, when masked men stopped the vehicle. They demanded that the other girls identify Malala, and when they did, the men shot Malala at close range in the head and neck. The gunmen also shot two other girls, wounding them both. The attack on Malala by the Taliban was heard around the world.

She was taken in a military helicopter to an intensive care ward in Peshawar for stabilization and then on to the UK for more intensive care. Today, Malala has improved through numerous surgeries, including two to repair her shattered skull and restore her hearing. She has returned to school and she and her family are temporarily living in Birmingham, England while she continues her rehabilitation and recovery.

In her own words at the UN yesterday, here is what Malala said of that horrible day:

“On the ninth of October 2012, the Taliban shot at me and my friends. They thought their bullets would silence us, but they failed. Out of the silence came thousands of voices. Hopelessness died and strength and courage was born.” -Malala Yousafzai, UN speech

Wearing a shawl that belonged to assassinated Pakistani Prime Minister Benazir Bhutto, Malala said she had no desire for revenge against the Taliban or any other terrorist group. That is amazing in itself. Because personally, I want all terrorists waterboarded repeatedly first and then killed.

You can watch the full video of Malala’s speech at the UN below. It’s really remarkable.


Here’s also a transcript of the speech that Malala Yousafzai gave at the UN. And by the way, Malala Yousafzai’s memoir (she’s 16, folks!) will be published this fall. God bless her and keep her safe because frankly, this young Pakistani girl really needs it.

“There was a time when women asked men to stand up for their rights. This time, we will do it ourselves.” — Malala Yousafzai, UN speech

Please click on the more button below for our Weekend blog reading links.

Teach at Pirate’s Cove is blogging about “NC Kids Don’t Have Clean Breathable Air Or Something.” 🙂

The Other McCain has many good blog posts up including this one by Stacy on “‘Protest,’ Riots, To-may-to, To-mah-to.”

ST at Sister Toldjah has up a post on “#TXlege: The abject failure of modern “feminism” explained in one simple picture.”

Mandy Nagy at Legal Insurrection has up a great post today on “Greenwald Tells Argentinean Media Snowden Has Info That Could Be US’ ‘Worst Nightmare’.”

Kurt at Gay Patriot has up an interesting blog post on “From the comments: What we must acknowledge about the left.”

Glenn Reynolds or Instapundit has many great posts at his blog hub from all over the blogosphere so go check them out! And you can read Glenn’s latest column in The NY Post here.

Emily at NakedDC has a blog post up on “The solution to the #BroChoice dating problem.” 🙂

Dana at The First Street Journal has up a great post called “Rule 5 Blogging: The IDF again!” Yes, there’s pictures. 🙂

B5 over at Blackfive has up a post called “Photo: Marine Six Days After IED – “Spiritus Invictus!” It’s awesome.

Jammie at Jammie Wearing Fools has up a post on “Jars of urine, feces confiscated at TX capitol as abortion bill voting takes place.” Lovely.

This Ain’t Hell has a bunch of great posts up today including this one by Jonn called “Half-assed media.” You want to go read this and don’t forget the comments. 🙂

As always, Michelle Obama’s Mirror has up a terrific blog post called “You can keep your healthcare.” Lie to Me: a continuing series.”

American Power also has up this blog post on “Homosexuals Protest FDA’s Tainted Blood Ban.” What could go wrong?

Dan Riehl has a blog post up at Riehl World View on “The Liberty Amendments: Restoring the American Republic: Mark R. Levin.” I can’t WAIT for this book! It will be released on 8/13/13.

Three Sure Things of Life has up a great post called “Those Who Fight the REAL “War on Women” Exposed, Public Yawns and Awaits Show Trial Verdict.”

and finally, Ace at AoSHQ has this up on post-Sharknado… “Like Woodstock, Everyone Talks About Sharknado But Few Actually Attended.” 🙂