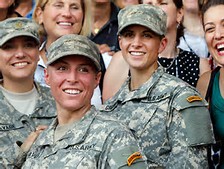 Sophie Cruz is the little girl who managed to break through the Pope’s security line this week, and ended up getting a hug and kiss from the Pontiff. She gave him a t-shirt and a letter she supposedly wrote herself. As sweet as the scene was, it was a set up.

Sophie, who is 5, was brought to Washington by her illegal immigrant father and Full Rights for Immigrants Coalition. They had been planning this encounter for a year. If it hadn’t have worked out in D.C. the plan was to follow the Pope to NY and Philadelphia to try again.

“We planned to do this from the moment we learned he was coming to the States,” Juan Jose Gutierrez of the Full Rights for Immigrants Coalition told The Associated Press. “We have been working for a while now trying to sensitize the American public that dealing with immigration is not just dealing with the people who came in without proper documents but that we also have … countless children whose parents are undocumented.”

Gutierrez said the group decided to use the children of immigrants to represent their push for immigration reforms to the pope, a staunch supporter of immigrants. “We have been looking for children to make the case that we as adults have been making for years,” he said.

But Full Rights for Immigrants Coalition probably had a good idea that it would work since they had done they same thing in Italy last year with 10 year old Jersey Vargas.

Jersey, also from Los Angeles, gave the Pope a message that her illegal father was in a Louisiana jail, supposedly ready to be deported. After that poignant photo op, a relative bailed Jersey’s father out of jail. The good Lord works in mysterious ways.

Here is Sophie’s letter. See if you think it was written by a 5 year old: 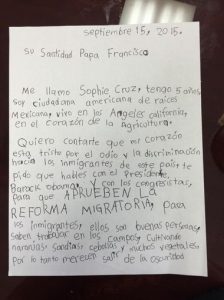 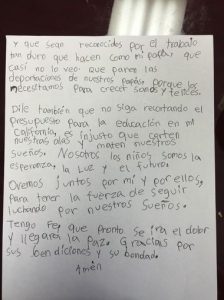 My translation (forgive me if it’s not perfect, but I think I’ve got the big points):

My name is Sophie Cruz, and I am 5 years old. I am an American citizen of Mexican roots. I live in Los Angeles California, in the heart of the agriculture.

I want to tell you that my heart is sad for the hate and the discrimination on the immigrants in this country, and I ask you to speak with President Barack Obama, and the congress, to PASS IMMIGRATION REFORM for the immigrants. They are good people, they know how to work in the fields, cultivate oranges, watermelon, onions and many vegetables. Therefore, they deserve to come out of the darkness so that they can be recognized for their hard work that they do like my dad. That hardly I see it. That they should stop the deportations of our fathers because we need them to grow healthy and happy.

Tell him also not to continue reducing the budget for education in my California, it is unfair that they cut our wings and kill our dreams. We are the children who are the hope, the light and the future.

We pray together for me and for them, so to have the strength to follow fighting for our dreams.

I have faith that soon you will see the the pain go away and the arrival of peace. Thank you for your blessings and your goodness.

In Sophie’s TV interview she said:

Here’s one view on how heartfelt the little girl’s sentiments were:

In Sophie’s interview with CBS, she answered most questions about her embrace with the leader of the world’s 1 billion Catholics with one or two word answers. Asked about immigration, she delivered long, seemingly memorized responses about why her parents and other immigrants deserved to stay in the United States.

Here is a summary of the events surrounding the meeting:

Here is a video of the same scene shot by someone very close to Sophie. It shows her being lifted over the barricade by her father, and running to give the Pope her gifts. She is stopped by security, and turned around. She starts walking back to her father, but she is told again by someone in her group to go to the Pope, and she turns around and starts walking toward the car. At that point the Pope saw her and ushered her over. When she returns to her father he says, “I love you” over and over. The people around her congratulate her and tell her how good she did. You will see in the video that she is crying.

It’s clear that none of this is her idea. She has been manipulated into these actions and sees that the way to receive love is to do these things. This is child abuse.

It’s sad that children should be used in such an exploitative way, but when you consider that Congress can’t even find the spine to stop tax payer dollars from going to the baby parts chop shop at Planned Parenthood, it is not surprising that scenes like this are manipulated for political effect, and further that they are effective at turning public sentiment with an adult crafted narrative that uses innocent children as its primary prop. You know, sometimes those kids can serve a purpose, right?

Below is a picture that Sophie drew for the Pope. The immigration issue is not about skin color, but Sophie has been led to believe that it is.

Everyone will remember the little girl being lifted to the Holy Father; no one will hear how she is a pawn in an enormous illegal enterprise that is cutting America to its core.