These women are simply amazing warriors. They are fighting a war with both combat arms and psychology. The Women’s Protection Unit (also called the YPJ), made up of female Kurdish fighters, got a much-deserved write up in Marie Claire magazine recently, and pictures of some of these brave young women are being tweeted out all across social media.

The psychological impact of an all-female fighting force is huge on a group like ISIS.

That’s because their beliefs teach that suicide missions lead to an afterlife of 72 virgins — unless they’re killed by a woman. Then, their afterlife is virgin-free, spent in the fiery furnaces of hell, a lawmaker told the New York Post.

“These ISIL soldiers apparently believed that if they were killed in battle, they went to paradise as long as they were killed by a man,” said Rep. Ed Royce, chairman of the House International Relations Committee, in the New York Post.

But if they’re killed by a woman, then it’s a no-go on the virgins, he said.

Reports are now out that one of the YPJ carried out a suicide bombing attack on an ISIS position outside of the Syrian border town of Kobane.

The Syrian Observatory for Human Rights said the woman blew herself up at an ISIS position east of the city, killing a number of jihadists who have surrounded Kobane and are battling to seize it.
“The operation caused deaths, but there is no confirmed number,” Observatory director Rami Abdel Rahman said.

As much as I loathe the idea of suicide bombing, there is a fair amount of irony in ISIS, who has no problem using this tactic itself, having the tables turned on them.

These women are in a kill-or-be-killed situation. If they fall into the hands of ISIS, they will be killed – and most likely raped beforehand. And yet, they fight. Diren, a soldier interviewed by the BBC, put it this way:

“We’re not scared of anything,” she says. “We’ll fight to the last. We’d rather blow ourselves up than be captured by IS.”

Like the followers of the Islamic State, most Kurds are Sunni Muslims. But that is where the similarities end. Diren says that, to the fanatics of IS, a female fighter is “haram”, anathema: a disturbing and scary sight.

“When they see a woman with a gun, they’re so afraid they begin to shake. They portray themselves as tough guys to the world. But when they see us with our guns they run away. They see a woman as just a small thing. But one of our women is worth a hundred of their men.”

These are the warriors that the West should be paying attention to and supporting. They are on the front lines, fighting for their own right to live freely. May God be with them. 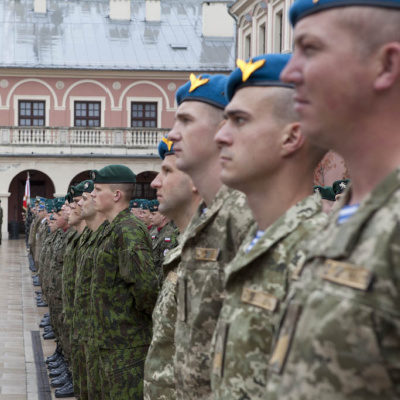