it’s getting crowded under that bus!

it’s getting crowded under that bus! 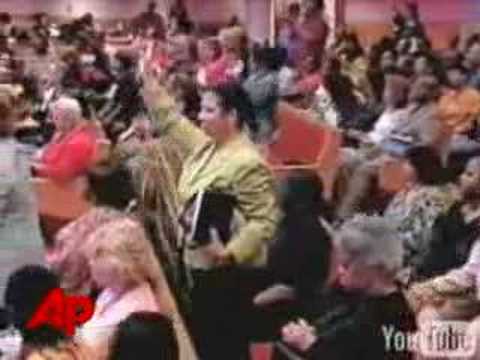 as we have come to learn a little more about Mr. Obama, we have found that he has neither experience nor much of a moral compass.well they’re outta there!  barack and michelle obama has finally decided to withdraw their membership from the racist trinity united church of christ in Chicago.

the likely democratic nominee finally leaves his toxic church after once again news broke on the vile hateful preaching coming from its ministers and guests — the most recent father pfleger of st. sabina’s catholic church in chicago.

when even the associated press notices the racism and standing ovations at obama’s church it became the beginning of the end for the obama’s at trinity.

can you actually throw a whole church under the bus?  it’s already being called a “wimp out” by those on the left.  remember, obama has attended this church for over 20 years.

just like he did with jeremiah wright, it took another outburst from the pulpit before obama decided to distance himself from the racist church.  politico has a bit more on the story.

in the press conference following his announcement, obama said that he is not denouncing trinity church “It is not a church worthy of denouncing!”

oh really?  if this church and all its racist antics are not worth denouncing, i frankly don’t know what is.  he also said he didn’t want his church experience to be a political circus.  you’re kidding right?

barack obama, democratic candidate for president of the united states.  he once said “The biggest challenge, I think, is always maintaining your moral compass.”  you can read more about his personal faith (if you haven’t quite seen enough) here.

now there’s a man of principle, willing to stand up for his friends and spiritual mentors.  uh not really.  it shows obama