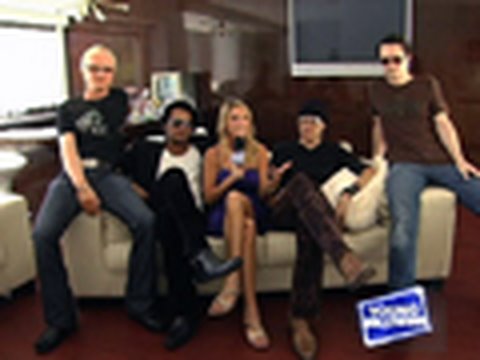 by Cassy Fiano in Headlines 11 Comments

A friend of mine sent me a link to a video on YouTube of a series called “Young Hollywood”. This “episode” is entitled “The Pick Up Artists” and it is of four guys named Nehow (sp? it was impossible to tell), Matador, Mystery, and Lovedrop (I’m not kidding on the names) who claim they can pick up any girl, anywhere, any time. And if you buy their book, you can too!

Apparently, they’re an “international community” of pickup artists, and the “art form” was “invented” by Mystery.

What, were they the first men ever to decide they wanted to pick up a chick at a bar? Please. The best part is, Lovedrop brags that they spent the last ten or fifteen years “developing the system”.

Mystery claims that these four are defining all social interaction, and that there are natural phases that every sexual relationship goes through, and that most people aren’t aware of those phases. If you buy their book, you can learn what those phases are and get ANY woman you want into bed!!!

Can I just mention that if any of these four guys came up to me at a bar, that I wouldn’t give them the time of day? Nehow gives me a strong gay vibe, Matador… well, he kind of comes off like a child molester. And the other two give off the biggest geek vibes I’ve ever seen, but they are so disgustingly full of themselves that they don’t stand a chance. Being a geek is not a bad thing, but when you are so ridiculously self-assured that you brag about how you can get any woman into bed… well, that’s the number one way to ensure that you’ll be sleeping alone.

And their names! If someone came up to me and said, “Sup, baby, my name’s Matador”, or “Hey, I’m Mystery”, I don’t think I’d be able to resist the urge to laugh. I mean, come on! Matador? Mystery? Lovedrop? Where do they come up with these names??

Anyways, Mystery goes on to say that by using their system, every woman is available to you, taken, single, married, whatever. She’ll never say no, and she’ll never want to. It’s like a superpower, he says. And if you buy their book, you can, too!

Excuse me while I snort in disbelief.

Matador states that, when picking up girls, emotions are bad. Nehow adds that what works is being a fun, compelling person who “sucks people in”. When you see them doing a pick-up, he says, you can’t tell they’re doing a pick-up. They’re just cool guys. Hanging out.

If I can’t tell a guy is trying to pick me up when he’s doing a pick-up because he’s a “cool guy hanging out”, it’ll be unsuccessful. Girls kind of want to know that you’re interested. The aloof thing is our territory, buddy.

Nehow goes on to say that he can make out with a girl while she’s holding her boyfriend’s hand, and there’s a “method” he uses to do that. UGH.

These guys just annoy the crap out of me! This whole “I can get any girl I want using my pick-up artist superpowers”. Do they not realize that guys that full of themselves are huge turn-offs? Girls aren’t interested in guys who brag about how they can get you into bed because they are just that awesome.

The worst part of these guys is that, although they have egos the size of Jupiter, not one of them is good-looking! They all have weird names, and when I watch the video more, every single one of them gives off that creepy vibe. You know, like if they got caught molesting baby goats you wouldn’t be surprised.

I mean, what is their big dating secret? Rohypnol?

I guess if you buy their book, you, too, can learn how to pick up any girl by looking like a serial killer/goat molestor who has an ego bigger than Colin Farrell’s. Just slather on some black nail polish, grow your hair out to be nice and long, and make sure it is greasy as well, get some hip sunglasses going on, give yourself a “cool” name like Matador, Mystery, or Lovedrop, and girls will SWOON.

Upon doing some research, I found this interesting little snippet (emphasis mine):

Frances Whiting, writing for The Sunday Mail, also criticized Mystery Method tactics used by Mystery. She writes: “Mystery advises would-be wooers to: ‘Take the victim down from their friends, family and home. Once isolated they have no outside support and in their confusion are easily led astray.’ Oh, I’m sorry, clearly I’m reading from that other well-known book about male/female relationships, Dating: A Stalker’s Guide…and why any man would follow Mystery’s advice I do not know.”

That is incredibly disturbing. I feel mildly vindicated. Just by looking at these guys, you can tell how creepy they are, and that quote says it all. Isolating friends and family from the “victim” in order to keep them confused and with a lack of support so you can lead them astray?

And this is how Mystery advocates getting girls into bed. Nice.

Previous:
How to (successfully) pick up a woman at a bar