From The VG Bookshelf: We Spoke Out

From The VG Bookshelf: We Spoke Out 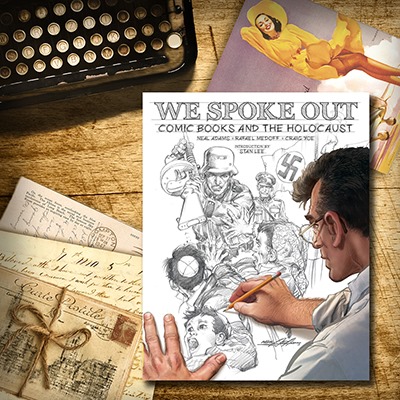 The popularity of comic books often makes them the perfect medium to discuss weighty issues in smaller and more easily understood pieces. The collection of comic book stories in We Spoke Out: Comic Books And The Holocaust shows how artists from the 1950’s onward have tried to tell their readers about the horrors of the Holocaust through art, and sometimes with the help of their favorite superheroes.

Published in April 2018, We Spoke Out was a collaborative project between comic book artist Neal Adams, historian Rafael Medoff, and comics historian Craig Yoe. Each comic selected for the book deals with an aspect of the Holocaust, sometimes explicitly with historical exposition, and sometimes allegorically with the help of popular superheroes. Every comic is accompanied by an introductory essay, which talks about the personal connections of the artists and writers – many of them Jewish – to their work in the comics. And it doesn’t hurt that Stan Lee wrote both a forward and an afterword for this compliation.

Falling into the historical category are stories like “Desert Fox” (published in 1951), “Walls of Blood” (published in 1976), and the gripping two-page “Holocaust” (published in 1981). Some of the early comics were published before the creation of the Comics Code Authority (established in 1954 and formally disbanded in 2011), and even though some of these comic illustrations pushed the boundaries, there was a realization that historical accuracy, not done for shock value, was more important than glossing over the reality of the horrors that had been committed. Some of these historical stories used fictional locations instead of real ones, but the impact of the stories remains the same.

The allegorical stories in We Spoke Out are usually ones that deal with an element of the Holocaust with the help of superheroes. Included in the book are an early story of Captain Marvel (from 1969), a Batman standalone Halloween story (from 1971), two Captain America comics (from 1979 and 1980), and the beginnings of the X-Men retcon of Magneto as a Holocaust survivor (something that would be fully incorporated into the character’s backstory and later shown on-screen in multiple movies) in 1982’s “Gold Rush.” Many of these stories deal with hunting down fictional Nazis who escaped after the war, and the trauma suffered by survivors, shown to the audience through the eyes of well-known characters.

Adams and Medoff, working with Disney Educational Productions, created the animated comic project “They Spoke Out: American Voices Against the Holocaust.” One of their stories, “The Last Outrage,” written in 2008, is the last “comic” in the book. It tells the true story of artist Dina Babbitt (born Dina Gottliebova), a Jewish woman from Czechoslovakia who was eventually imprisoned in Auschwitz, who managed to save her life – and the life of her mother – by painting portraits for none other than Josef Mengele. In 1973, Babbitt learned that some of her paintings had survived, but the Auschwitz State Museum in Poland refused to return them to her, despite her intellectual property arguments, the support of the comic book art industry, and a Congressional resolution in 2001. An animated version of “The Last Outrage” was made in 2009.

In the forward to the comic, Medoff writes about the museum’s rationale for keeping the portraits.

The Auschwitz Museum dug in its heels, refusing to part with any of the seven paintings. A museum spokesman claimed that “if anyone has a right to these paintings, it’s Dr. Mengele, but I doubt he will pick them up.” In response to that ghoulish position, 50 attorneys and law professors signed a petition explaining that since Mengele had coerced Dina to paint them, he could not be regarded as the legal owner of the artwork. (Chapter 18, “The Last Outrage,” page 271)”

Sadly, Dina Babbitt died in 2009 without regaining the paintings, even though her estate and family continues the struggle to regain control of her art, with the now-late Stan Lee’s afterword expressing his support for the Babbitt family’s ongoing efforts.

We often talk about how the younger generation isn’t being educated about the Holocaust, and we see the revisionst views and outright denials that have seeped insidously into popular thought. This book is a testament to the fact that there are ways to talk and teach about the Holocaust that don’t involve movies or textbooks. Comic books have always been an accessible reading format – one needs only to look at the recent explosion of graphic novels in children’s books to realize that this form of art helps convey images and stories in an impactful way, that sometimes cannot be achieved by the written word alone. While I know many parents and teachers who are concerned that graphic novels are not the best format for reading skills, they are a much easier format for those with learning disabilities to use. If the point is to actually learn something, or to get a kid excited about having an actual book in their hands, should we nitpick about the format involved?

I read this book in the hopes of getting an idea of how to teach my teenage son, who is on the autism spectrum and a devoted Batman fan, about the Holocaust someday. We Spoke Out is an incredible collection of gripping imagery and thought-provoking storylines. Some of the content involved is definitely meant for more mature readers (I would put this at the mid-to-late teenager range, but like most things, any child’s interest and ability to comprehend will vary), so I do encourage parents to read this first in order to understand what is being shown, which would allow for deeper questions and discussions with your own child later. My son is not quite ready for this book, but when he is, I will be incredibly grateful to have this tool on hand to begin the discussion.