Chloe’s Cupcakes Shut Down by Government – Why it Matters

Chloe’s Cupcakes Shut Down by Government – Why it Matters

by Ruthie Thompson in Headlines 8 Comments

Chloe Stirling is a child. In fact, she is only 11. A couple of years ago, she made a deal with her parents that she would earn and save her money so that she could buy her first car when she turned 16. Her mother agreed to match the amount that Chloe saved as a contribution. It was then that Chloe made the decision to sell cupcakes in order to raise the money. Chloe set her prices moderately at just $10 a dozen or $2 each. She also donated her time to charity when a fellow classmate was diagnosed with cancer. Chloe made cupcakes in order to help raise money for his treatment. Chloe showed all the signs of a true entrepreneur. However, just one day after Chloe was featured on the front page of a local newspaper, the government shut her business down.

en- tre- pre- neur     noun     1. a person who organizes and operates a business or businesses taking on greater  than normal financial risks in order to do so

The Madison County Health Department got wind of the story and informed the family that they were in violation of the county’s food ordinance and also of the state of Illinois’s Food Sanitation Code. Their recommendation to the family was to build  a bakery or seek a separate facility in order to conduct their business. For a child, this is not feasible. Especially if that child is only 11.

So why does this matter? It was not long ago that another story caught national attention when an 11 year old girl named Madison was told that she could not sell mistletoe in order to help her parents with the cost of her braces. Madison cut and packaged the mistletoe herself. However, she was told by a private security guard to leave the area due to city rules. She did not have the required approval or documentation to earn money through dedication and hard work. However, she was informed that she could beg for money if she wished to remain there.

What does this teach our children? In a day where so many American families are struggling to make ends meet, our government with their rules, regulations, permits and city ordinances are hindering not only small businesses, but our potential future entrepreneurs as well. Here are children willing to work and dedicate their time to earn money for things that are important to them.  These kids are our future and we can teach them to work hard for the things they want or we can teach them to put their hand out and ask someone else to pay for it. I grew up in the days of the lemonade stands and bake sales. We had to earn money if we wanted something. My parents had 8 kids and didn’t have the luxury of buying us everything we wanted. But even lemonade stands are being shut down today if the required permits are not obtained prior to opening for business.  Our society is changing. It is acceptable and easy to put an EBT card in the hands of a child, but don’t expect it to be easy if your child has the drive and the creativity to want to work and pay for things themselves. Teaching kids to be self sufficient has it’s challenges. Yet we wonder why we have so many who are government dependent… 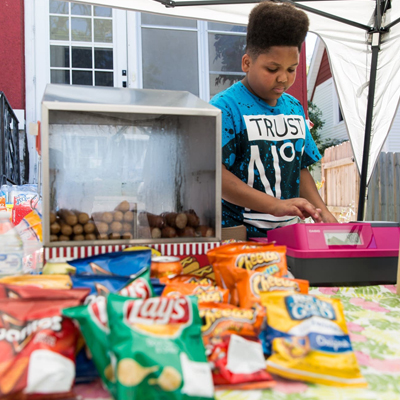