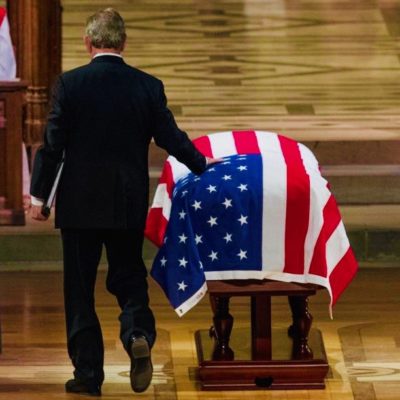 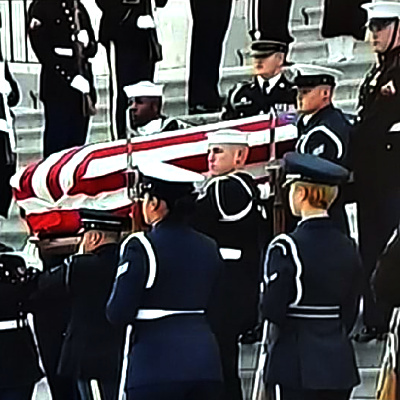 The National Cathedral provided the perfect venue to say goodbye to our 41st President George H. W. Bush. The eulogists, including his son our 43rd President, told stories filled with humor, sadness, honor and courage. Ronan Tynan and the choirs lifted our nation up with their voices. The military personnel were squared away. The clergy gave us hope. Apparently, The New Yorker Magazine writer Susan B. Glasser thought she was reviewing a movie. Glasser titled her article “George H. W. Bush’s Funeral Was the Corny, Feel-Good Moment That Washington Craves” and that is the high point of the article. For The New Yorker, the Bush Funeral was an opportunity to insult our current President and average Americans.

There were so many beautiful moments before, during and after the services. For beautiful thoughts, I suggest you read Amanda’s post on G. H. W. Bush, as a man of letters and Nina’s post on the tribute given by 43 for 41.

But, let us turn to The New Yorker now. The New Yorker has always laughed at us hicks in the sticks. But, at the same time, the magazine poked fun at New Yorkers, mainly through the editorial cartoons. The well-known malady affecting the so-called elitists, “Trump Derangement Syndrome” has so mouldered the brain of Glasser that she can no longer put politics aside to see majesty, beauty and comity. After giving a quick nod to the majesty of the occasion, she wrote:

For more than two hours, the visibly uncomfortable forty-fifth President had to listen to Bush extolled in terms that would never be applied to him. “Best instincts,” not “worst impulses.” “Kinder.” “Gentler.” “Courageous.” “Principled.” “Gentlemanly.”

Glasser is not the only one who thought all the eulogists were aiming those lines at President Trump. I turned on MSNBC for thirty seconds and heard that kind of drivel. From my point of view, there were at least six people in that front row left that I wouldn’t call “gentlemen” (Trump, both Obamas, both Clintons and Rosalynn Carter, much meaner than Jimmy). I wouldn’t call the Clintons “courageous” or “principled” either. As former Senator Alan Simpson said in his eulogy, ““Those that travel the high road of humility in Washington are not bothered by heavy traffic.” Simpson is still one sharp guy.

And, speaking of Simpson, Glasser had this to say about his container reference:

Later in his talk, standing at a lectern placed just a few feet in front of Trump, Simpson quoted his mother in observing that “hatred corrodes the container it’s carried in.” Trump, a man of seething hatreds, stared at him with arms folded. Meanwhile, Simpson observed of Bush, “He never hated anyone.”

Again, Glasser was seeing the Bush Funeral through her TDS affected eyes. I have two words for her: Hillary Clinton. That is one corroded container. I didn’t pay much attention to Trump during the funeral. I was alternately laughing and crying and paying attention to the speakers.

I am not going to argue that President Donald Trump is a gentleman. He’s a builder, in New York City chiefly. Puhlease!

Maybe, just maybe, those eulogists today are better people. Maybe there were no barbs aimed at Donald Trump. And, maybe they just wanted to honor our 41st President. It that so difficult a concept for these gnat brained elitists to grasp? And, as Breitbart.com reported, former Florida Governor Jeb Bush went out of his way to say how “gracious” Trump had been. Silence would have been a dig at Donald Trump. Jeb didn’t have to say anything.

As Michael Goodwin wrote in the New York Post:

It all just goes to prove that Democrats and their media handmaidens really do love Republicans — when they’re dead. All the more so if, when they were alive, they ­opposed President Trump.

Exactly. Democrats have been vile to every Republican president since Eisenhower. Let them open their gaping pie holes and praise him now. We know the truth of it.

Instead, I will remember these types of moments from the Bush Funeral:

Let us feel sorry for those who cannot put aside their hatred for a few hours to honor a man without bashing another. And if it is corny and feel good to have thought the service majestic and uplifting, I plead guilty. Fair winds and following seas, sir.